New forms of cultural nationalism? American and British Indians in the Trump and Brexit Twittersphere 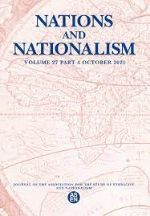 Diaspora networks are one of the key, but often invisible, drivers in reinforcing long-distance nationalism towards the ‘homeland’ but simultaneously construct nationalist myths within their countries of residence. This article examines Indian diaspora supporters of Brexit and Trump in the United Kingdom and the United States who promote exclusionary nationalist imaginaries. Combining quantitative and qualitative approaches, it analyses British Indian and Indian American users that circulate radical right narratives within the Brexit and Trump Twittersphere. This article finds that these users express issues of concern pertinent to the radical right—for example, Islam and Muslims and the left-oriented political and media establishment—by employing civic nationalist discourse that promotes cultural nationalism. It sheds light on digital practices among diaspora actors who participate in the reinvigoration of exclusionary nationalist imaginaries of the Anglo-Western radical right.