The internal brakes on violent escalation: a typology 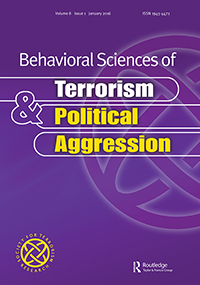 Most groups do less violence than they are capable of. Yet while there is now an extensive literature on the escalation of or radicalisation towards violence, particularly by ‘extremist’ groups or actors, and while processes of de-escalation or de-radicalisation have also received significant attention, processes of non- or limited escalation have largely gone below the analytical radar.

This article contributes to current efforts to address this limitation in our understanding of the dynamics of political aggression by developing a descriptive typology of the ‘internal brakes’ on violent escalation: the mechanisms through which members of the groups themselves contribute to establish and maintain limits upon their own violence.

We identify five underlying logics on which the internal brakes operate:

The typology is developed and tested using three very different case studies: the transnational and UK jihadi scene from 2005 to 2016; the British extreme right during the 1990s, and the animal liberation movement in the UK from the mid-1970s until the early 2000s.