UiO Faculty of Social Sciences C-REX - Center for Research on Extremism
Main navigation
Back to uio.no
Sub navigation Menu
Publications > 2018 > Getting ‘right’ into the news: grassroots far-right mobilization and media coverage in Italy and France

Getting ‘right’ into the news: grassroots far-right mobilization and media coverage in Italy and France 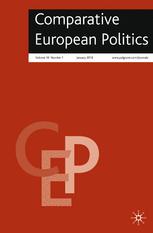 How do non-established far-right actors reach visibility in the media?

While much research focuses on media visibility of progressive movements and established parties, little is known about the coverage of grassroots far-right mobilization. Inspired by insights from media studies, social movement literature, and scholarship on the far right, the paper suggests that media coverage is a function of the protest strategies of non-established far-right actors.

To this end, We use a new dataset measuring political claims made on the websites of CasaPound Italia (CPI) and the Bloc Identitaire (BI), and from newspaper reports in France and Italy. We use logistic regressions to quantify increasing media coverage based on specific characteristics of mobilization (issue ownership, dramatization, confrontation and counter-mobilization).

Focusing on two countries with comparable political contexts but major differences in other factors relevant to far-right mobilization (number of migrants, asylum seekers, perceived most important problem, and proximity to elections), we illustrate that news coverage is more likely when CPI and BI mobilize on immigration, engage in street protest, and create public controversy.

While broader comparative evidence is needed, the paper offers a novel meso-level perspective on the interplay between far-right mobilization and media attention, and it sets out an innovative method to combine online and offline data for the study of protest in far-right politics.