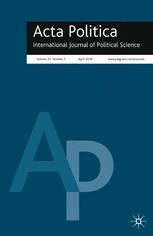 Considering the case of migration, the paper develops a dimensional framework for the analysis of the politicization of complex issues in public debates.

It argues that since cross-sectoral issues are multidimensional in nature, public debates about them are best understood in terms of selective emphasis over their constitutive dimensions.

Empirically, it examines seven West European countries from 1995 to 2009 based on claims-making data collected by the Support and Opposition to Migration project team. Focusing on both actor-level and political opportunity determinants of the salience of issue dimensions, the analysis examines the varying importance attributed to four constitutive dimensions of the immigration issue, corresponding to socioeconomic, cultural and religious, security and civic aspects.

The findings confirm that the composition of public debates on complex issues is not restricted to one single understanding, but changes depending on the actors involved in the debate and on contextual circumstances defining their involvement. As such, this research has profound implications for the scholarly understanding of issue competition and agenda-setting processes.