UiO Faculty of Social Sciences C-REX - Center for Research on Extremism
Main navigation
Back to uio.no
Sub navigation Menu
Publications > 2016 > The Norwegian Progress Party: Between a Business Firm and a Mass Party

The Norwegian Progress Party: Between a Business Firm and a Mass Party 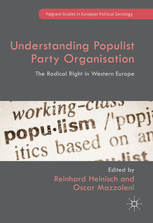 Right-wing populist parties are thriving throughout Europe. With few exceptions, political systems have seen such parties make significant electoral gains and shape the national political discourse across the continent. In recent years, many populist parties have undergone leadership changes and other evolutionary challenges to which they adapted well, often contrary to expectations. This timely collection is devoted to understanding how Western European right-wing populist parties organize themselves.

Without understanding the role of the organizational dynamics, we fail to understand how populist parties adapt over time and thus endure. Providing a systematic and comprehensive analysis of organizational issues of populist parties over time, Understanding Populist Party Organisation explores a range of political parties in Western Europe, examining their internal dynamics and questioning whether it is possible to discern or construct a general “populist” party typology of organization and representation.