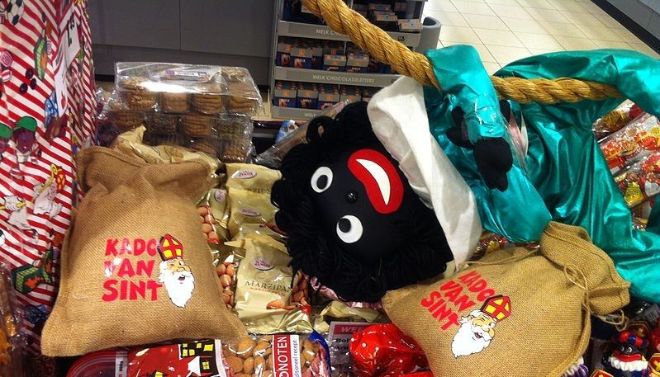 Late November is an interesting time to visit the Netherlands – oblivious international travelers stop and stare, as they encounter white Dutch people wearing blackface, afro wigs, big red lips and golden earrings. These ‘Black Petes’, as they are called, dance around the street in colourful colonial style suits, hand out candy to children, and cheerfully wave at passers-by. They are part of a longstanding national tradition, and their appearance has gone unquestioned for centuries. In recent years however, Black Petes have triggered an inflammatory social debate, rife with ethnic nationalism, racism, and death threats. Who are these Petes, and how did they become a source of contention?

Blackface or chimney soot: the colonial background of Black Pete

Black Petes are part of an old children’s holiday called ‘Sinterklaas’. They accompany the Catholic priest ‘Saint Nicholas’, or ‘Sinterklaas’, who travels across the country on horseback in celebration of his birthday on December 5th, and hands out presents and candy to all children with the help of his small army of Petes. The common story behind Black Pete’s skin colour is that he climbs down chimneys to deliver presents, and gets covered in chimney soot. The attentive reader might note that this fails to explain his other features, as well as his spotlessly clean clothing. In fact, historical evidence shows that the current stereotype of Black Pete originates from 19th century iconography, at a time when slavery was still legal under Dutch law. A popular children’s book written by Jan Schenkman around 1850 introduced the image of Black Pete as a Moorish servant, a common sight in affluent households at the time. Due to the popularity of the book, this depiction of a young black servant as Black Pete has become a dominant aspect of the Sinterklaas tradition to this day. It is important to note that in the last 150 years or so, Black Pete has come in multiple shapes and forms, and has historically deviated from his original ‘Moorish servant’ appearance. This fluidity however, is rarely acknowledged in the current discussion.

The public debate about Black Pete erupted in 2011, after the abusive police arrest of two anti-Black Pete protesters attracted a lot of media attention, and caused outrage among black communities in the Netherlands. For almost a decade now, proponents of Black Pete insist he is an innocent part of an important national tradition, whereas opponents argue his current appearance represents the practice of slavery and as such, requires change. Over the course of this decade however, the debate has triggered a significant shift in public opinion. In 2009, before the public discussion around Black Pete, world famous Dutch model Doutzen Kroes said she felt “ashamed to be Dutch during Sinterklaas” on a left wing talk show, which was met by laughter, disbelief and dismissal of her fellow discussants. At the time, Black Pete was simply an unquestioned part of a longstanding tradition, whose racial appearance was rarely scrutinized, even in left-wing circles.

Recent polls held in 2019 show that mainstream attitudes have evolved, as roughly a quarter of the Dutch public is currently in favour of changing the image of Black Pete into a ‘chimney soot Pete’, which consists of a (usually) ethnically white Pete with some chimney soot marks on his face. Alternatives such as these are increasingly used across the country. This year, the Dutch national broadcaster, along with several large cities such as Amsterdam, Rotterdam, Leiden and Haarlem, exclusively made use of such ‘chimney soot Petes’, contrary to many smaller towns in predominantly rural areas. In this sense, the

discussion has become emblematic of the divide between the educated, liberal, left wing urban elite who support changing the appearance of Pete, and older, right wing, rural communities who hold on to ‘their’ traditional Black Pete. It is important to note that many of those who now call themselves opponents of Black Pete, may have thought very differently about the matter only a few years ago or in fact, may not have considered it something to have an opinion on at all.

In recent years however, the Black Pete discussion has taken a more dark turn, and has become an issue through which blatant racism and ethnic nationalism are expressed in the Dutch mainstream. Those who publicly speak out against Black Pete, such as politicians, talk show hosts, and the former lawyer of anti-Black Pete protesters, face death threats, and a small conference held by anti-Pete protesters was recently attacked by hooligans who tried to enter the building, and destroyed windows and cars outside. We can begin to understand these violent aspects of the Black Pete controversy as a radical expression of what are arguably rather mainstream values. The majority Dutch attitude towards the racist stereotype of Black Pete remains in favour – regardless of the hurt it may cause a minority population, whose ancestors had to suffer under the horrors of slavery, and who themselves still face the micro aggressions of ‘everyday racism’ in Dutch society. Politicians such as Prime Minister Mark Rutte further solidify the broadly shared dismissal of protesters’ complaints that it constitutes a hurtful and divisive stereotype, by stating we should all just ‘act normal’ and not confront poor Dutch children with angry protesters.

‘Go back to your own country’ – mainstreaming nativism

In a sense, the Black Pete discussion is a perfect example of Cas Mudde’s ‘pathological normalcy’ thesis, in which he argues that radical right populist parties are simply an expression of the more radical interpretation of mainstream values, and as such, should not be conceived as totally alien to Western democracies. Ideologically, he conceives of the radical populist right as a mix of nativism (the idea that nations should only be inhabited by members of their own native group), authoritarianism (the belief in strict law and order, and severe punishment for transgressions) and populism (the belief that society is divided into the ‘real people’ and the ‘corrupt elite’). In addition, he argues that all three ideological values are indeed, widely shared across Western societies. The Black Pete controversy is a case in point, as it constitutes a majority of members of the native group imposing a racist stereotype on a marginalized minority, based on claims such as ‘if you don’t like our culture, go back to your own country’. Radical right discourse not only from parties such as PVV, but also from more ‘moderate’ politicians on the center-right, construct criticism of Black Pete as yet another ‘attack’ on Dutch culture by the forces of immigration, hence contributing to the nativist defense of this traditional icon.

Protest against Black Pete is perceived as unnecessary and even transgressive, and results in backlash to reassert ‘Dutch’ authority over complaining minorities. In 2017, a group of Dutch counter-protesters blocked a highway to prevent anti-Black Pete protesters from arriving at a national Sinterklaas celebration. Although this is a criminal offense, and led to several accidents and injuries on the highway, Dutch authorities did not arrest the persons blocking the road, and even sent the anti-Black Pete protesters back, as they were ‘too late’ to protest. This shows how authoritarianism in this case may not refer to the strict enforcement of the Dutch law, but more importantly, the enforcement of dominant Dutch traditions. It also indicates that the Dutch government is in fact complicit in oppressing views that challenge dominant norms and traditions. Finally, and as mentioned earlier, the Black Pete controversy has distinct regional, and class-based aspects, as it has slowly transformed into a struggle between the ‘urban liberal elite’ and the ‘real people’, of which the latter desperately tries to defend ‘their’ Black Pete from the corruption of immigration and evolving cultural values.

Addressing our (colonial) past is the only way forward

What can we learn from all this? We must understand that the violence against Black Pete protesters does not exist in a vacuum, and has emerged from mainstream Dutch expressions of nativism, authoritarianism, and populism. The continuing mainstream acceptance of blackface in the name of tradition cultivates a wider socio-cultural environment that silences the voices and concerns of an aggrieved minority, whose ancestors have suffered under Dutch practices of slavery, and who themselves continue to face exclusion and racism in their daily lives.
The fierce defense of Black Pete stems from a deep emotional response to the idea that Dutch people’s childhood memories are now retrospectively ‘tainted’ with accusations of racism. Although these initial, gut reactions are to some extent understandable, they can also serve as an entry point to finally facing the Dutch history of slavery, and all the emotions it invokes. A key issue in the current public debate is the inability to detangle intent from effect: someone who has celebrated Sinterklaas and Black Pete for decades may not have intended to hurt ethnic minorities, but the effect may be harmful nonetheless. As a society, the Dutch need to understand that the Black Pete discussion is not about brandishing individual people as horrible racists. Instead, it is about embracing a superficial change within a naturally evolving cultural tradition, so that all Dutch people (and more importantly, children) of all ethnicities may enjoy it.