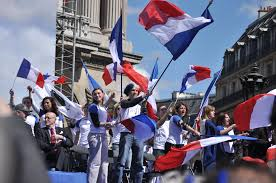 Marine Le Pen, the president of France’s National Front party and the unofficial leader of the European radical right, declared: “In 2016, the Anglo-Saxon world woke up. In 2017, I am sure that it will be the year of the Continental peoples’ rising up.”

On the podium, leaders of parties from Austria, France, Germany, Italy and the Netherlands tried to create an image of strength and unity, a political force on the brink of reshaping a continent. As Geert Wilders, the leader of the Dutch Party for Freedom, said with his characteristic drama (though ominously in German): “Yesterday a new America, today Koblenz and tomorrow a new Europe.”

Social and traditional media were, as usual, eager to spread the right wing’s message, referring to a “Populist International” led by Mr. Trump and his Russian counterpart, Vladimir V. Putin. This united front, many liberals worry, constitutes an existential threat to the world order.

Is this fear warranted? The idea of a Populist International, which really amounts to a “Nationalist International,” has long puzzled many analysts, who observe that nationalists, by definition, have a hard time working together.

Skeptics seem to be proven right by post-World War II history, which shows a long trail of failed initiatives at nationalist collaboration.

The clearest example of the disunity of today’s radical right can be found in the European Parliament, where right-wing parties have been trying to build a strong coalition since the late 1980s. These efforts have largely failed, as member parties got into fights over ideological, personal and strategic issues.

There’s little reason to believe they’ll be more successful collaborating now. As soon as Frauke Petry, the leader of Alternative for Germany, the party that played host to the conference in Koblenz, announced that Ms. Le Pen would attend, the German party’s vice chairman criticized the decision, saying in an interview that Ms. Le Pen’s National Front “does not fit us at all.”

There are roughly 13 far-right parties in Europe, but they are hardly homogeneous. Some, such as Hungary’s Jobbik, are fierce social conservatives; others, like the Dutch Party for Freedom, support L.G.B.T. rights. Some parties are aggressively anti-Semitic, while others, like the Flemish Interest, support Israel and try to appeal to Jews. They also differ widely on economic policies. The U.K. Independence Party is home to free-market fundamentalists, unlike many of the Continent’s radical-right parties, which support protectionism or preserving the welfare state.

These parties do share some common enemies, like an ill-defined “globalism,” the Western political establishment and, most specifically, the European Union. But even on this core issue there’s significant room for disagreement. Ms. Petry acknowledged as much in Koblenz: “Together with parties represented here we want a subsidiary Europe of the free home countries. We agree on this even if there are some differences in the details.” Indeed, some of the parties represented on stage want to take their countries out of the European Union entirely, while others want only to “reform” it.

Still, the European radical right is in a better situation than it once was in terms of its international standing. In 2000, when Austria’s Freedom Party became part of the governing coalition, the 14 other European Union member states boycotted its ministers. Moscow and Washington also strongly denounced them. In 2017, Europe’s radical right leaders find that they are increasingly welcomed in capitals around the world, from Budapest to Tel Aviv, Moscow to Washington.

Russia has taken a particular liking to the European radical right. Several of its leaders are regular guests on RT, a Kremlin-backed English-language television news channel. Representatives of Mr. Putin’s United Russia Party have met on many occasions with European radical right leaders. And rumors swirl about Russian financial support for radical right parties, though so far the only evidence is of a loan from a Russian bank to France’s National Front in 2014.

Washington under the Trump administration looks set to become a new pilgrimage site for Europe’s radical right. While Ms. Le Pen has not yet met with Mr. Trump or his inner circle, Nigel Farage, the former leader of UKIP, seems to have the best connections to the new president of any European politician.

But the specter of an ideologically coherent and organizationally united Populist International — one that already controls Moscow and Washington — wrongly suggests that right-wing populism is an unstoppable electoral force.

In reality, liberal democrats are still much more united, ideologically and organizationally, than the right-wing populists. Europe’s center-right and center-left parties continue to dominate politics both in individual countries and in European Union institutions. Despite recent tensions, they agree on the fundamentals of a social market economy, a tolerant multiethnic society and an integrated Europe.

The way to fight the radical right is not to inflate its strength by seeing ideological alliances where they don’t exist. Rather, liberal democrats should work together to exploit their opponents’ ideological and personal divisions. For example, challenging them to provide more details on their desired “subsidiary Europe of the free home countries” or their plans to address refugees and terrorism, two key issues in their propaganda, will make the inconsistencies of their national and international plan more visible.

This approach will not just weaken the radical right, it will force liberals to stop behaving defensively and, finally, put forward visions for liberal democracy based on their own issues and values rather than on overblown fears of a radical right on the march.

Cas Mudde is an Associate Professor in the School of Public and International Affairs at the University of Georgia (USA) and adjunct researcher at C-REX.

This Op-ed was first published in The New York Times January 26, 2017.