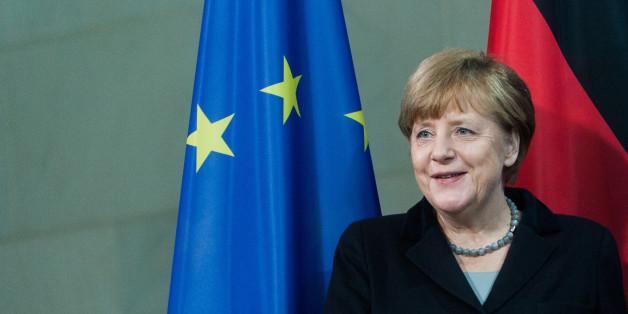 Declared Time's Person of the Year just months ago, the "Chancellor of the Free World" is now fighting for her political survival. Media and political insiders are openly speculating about her future - ironically, at the same time that she is the "firm favorite" for the Nobel Peace Prize for those same refugee policies.

Angela Merkel is a fairly accidental leader. Just like her former mentor, Helmut Kohl, she was broadly perceived as a temporary stand, in when she took over the Christian Democratic Union (CDU) in 2000. The party was in disarray and several (male) crown princes decided to wait it out before taking a shot at the party leadership -- i.e. wait until the CDU was back up in the polls and party leadership meant German Chancellorship.

To most people's surprise, Merkel did not only hold on to her party position, but she brought the CDU back into power in 2005, and is currently the third-longest serving (democratic) German Chancellor -- after the iconic Konrad Adenauer and theKanzler der Wiedervereinigung (Chancellor of the Re-Unification) Kohl -- and the longest-serving political leader in the European Union (EU).

During most of her more than ten years in power Merkel has been described as a weak leader, lacking power and vision. While this is largely due to enduring sexism in media coverage of female leaders, Merkel is first and foremost a centrist politician leading a pragmatic rather than ideological party; in fact, Kohl was a very similar leader, even if he was mostly described as powerful and with a strong (European) vision.

Like the party she leads, Merkel is a small "c" conservative, i.e. a pragmatic politician who wants to conserve rather than shape. That said, she has a strong belief in the ideological foundations of German Christian democracy, most notably European integration and the soziale Marktwirtschaft (social market economy), and has never wavered from these core values.

In fact, both her staunch pro-austerity position in the Greek crisis and her initially equally staunch pro-refugees position in the refugee crisis are deeply rooted in German Christian democracy. But whereas she found broad support for her economic policies, both within her party and among other European leaders, this was not the case with her immigration policies.

While making a strict distinction between (economic) immigrants and (political) refugees, taking a hard position on the former and a soft position on the latter, she was harshly criticized within her party - most notably by the youth branch, the Young Union (JU), and by the more conservative Christian Social Union (CSU) in Bavaria - and ignored by her usual allies, such as the prime ministers of the Northern European countries (with the initial exception of Sweden).

Today, the position of the nine-times "most powerful woman in the world" (according to Forbes) is more embattled than ever. After months of xenophobic campaigns in the media, politics, and streets, more and more leading members of her own party, as well as from her Social Democratic coalition partner, are attacking her proposed Willkommenskultur (welcome culture).

They are strengthened by the media frenzy that has followed the New Year's Eve sexual assaults in some German cities. These campaigns have left their mark on the population too. A new poll shows that 40 percent of Germans want Merkel to resign because of her handling of the refugee crisis.

While the numbers are much lower among CDU supporters, the fact that just 45 percent of Germans said she didn't have to resign, means that her position is significantly weakened and more and harsher attacks are to be expected in the weeks to come.

Merkel's political survival is not just important for Germany, it is crucial to politics across Europe too. Not in the sense of the EU, as any successor within the CDU will roughly continue her EU politics. It is crucial in terms of the Rechtsrück (turn to the right) in Europe, which has been ongoing for at least a decade, but has received a particularly strong push in 2015. The only reason Merkel is in political trouble today is her open position towards refugees - remember that her approval rating was sky-high during the Greek crisis (peaking at 75 percent in April 2015).

European politicians of the left and right are following Merkel's political struggle with intense interest. Should she be forced to resign, they will conclude that if the most powerful politician in Europe can be toppled because of a tolerant immigration policy, they stand no chance of surviving such a position themselves. Hence, what happens to Merkel has enormous ramifications for politics across the European continent.

If Merkel loses, the left will be faced with an increasingly homogeneous right-wing bloc, which in most countries has the support of the majority of the voters. Moreover, radical right parties are fast approaching electoral, ideological, and therefore political dominance within these right-wing blocs in several European countries (e.g. Denmark, Netherlands, Sweden) -- not to speak of the radical right transformation of East Central European right-wing parties like Fidesz in Hungary and Law and Justice (PiS) in Poland. In other words, Merkel's survival, assuming she remains loyal to the core of her political program, is essential to the continuation of centrist coalition politics and centrist socio-cultural policies, like immigration and integration.

It is ironic that the political survival of Merkel has become key to the political future of pro-immigration policies in Europe. After all, it was Merkel who in October 2010 famously said that "the multicultural approach ... has failed, utterly." But it illustrates the broader transformation of European politics, in which the center-left has become largely irrelevant and the center-right is increasingly embracing radical right positions and rhetoric. It is only within this specific political context that Angela Merkel, a classic German center-right politician in ideas and actions, holds the key to the political future of Europe's center-left.

Cas Mudde is an Associate Professor in the School of Public and International Affairs at the University of Georgia (USA) and adjuct researcher at C-REX. He publishes broadly on politics in Europe, Israel, and North America with a particular focus on (the interaction between) extremism and democracy. His main research agenda is informed by the question: How can liberal democracies protect themselves from political challengers without undermining their own core values?

The blog post Why Angela Merkel's Political Survival Is Crucial to Europe's Center-Left was first published by the The Huffington post.