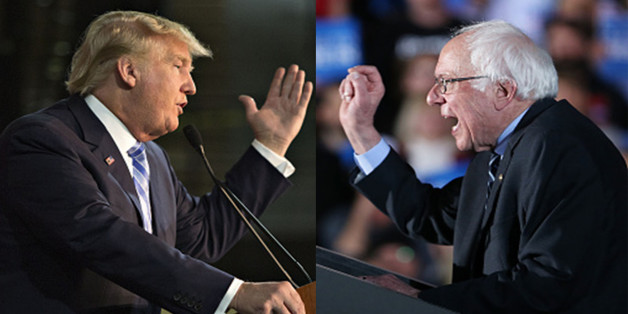 Then they could finally rehash their "rise of populism" articles, which they had already published a few months earlier, when Sanders and Trump first emerged as possibly relevant candidates. And we were not disappointed after the New Hampshire primaries: from "How Rising Trump and Sanders Parallel Rising Populism in Europe" to "New Hampshire Primary Results Underscore the Power of Populism" and "The Populists Are On Top," the message was loud and clear: there is a new sheriff in town, populism, and it is ruling supreme in US politics. But is it? And, if so, is that new(s)?

The answer depends partly, as so often, on definitions. Most commentators don't define populism and mainly refer to "anti-establishment positions" and "simplistic solutions" - in other words, to political campaigning. There is nothing new about this, of course, particularly not in the US. So let's use a definition that actually distinguishes populism from broader phenomena like demagogy and political campaigning. Populism is an ideology that considers society to be ultimately separated into two homogeneous and antagonistic groups, 'the pure people' and 'the corrupt elite', and which argues that politics should be an expression of thevolonté general (general will) of the people.

This definition is quite similar to the one US historian Michael Kazin uses in his seminal book The Populist Persuasion: An American History. Like most scholars of populism Kazin considers the People's Party of the late 19th century as the original populist movement. Kazin shows how populist sentiments have always been deeply rooted in US society, being exploited in time by both mainstream politicians - think about Richard Nixon's "silent majority" - and populist upstarts - none more popular than Texas billionaire Ross Perot.

The 21st century has seen an explosion of populism across the globe, from left populist presidents like Rafael Correa and Hugo Chávez in Latin America to right populist parties like Forza Italia (FI) and the National Front (FN) in Europe. The US has not been immune to populism either this century. After all, it was just a few years ago that (in part the same) pundits announced the "rise of populism" with regard to Occupy Wall Street and the Tea Party!

In many ways Sanders and Trump are the party political voice of these two movements. Not that either was a part of either movement, but they express very similar sentiments and find support among people who were part of, or at least supportive of, them. Many of Sanders critiques of the role of banks in the Great Recession and of the influence of money in politics are similar to those voiced at Zuccotti Park. And many of Trump's critiques of the GOP establishment and the Obama administration were part and parcel of the Tea Party in its many permutations. However, Trump is more the voice of the Tea Party grassroots, which was always more authoritarian and nativist than the business-dominated Astroturf.

The core of Occupy Wall Street's populist message was not just the division of society between "the 99%" and "the 1%", but the morality of that division. The 99% were good, pure, and the 1% were bad, corrupt. Occupy did acknowledge distinctions within the 99%, accommodating most notably gender and race, but these divisions were in the end secondary to the overarching moral struggle against the homogeneous 1%. It was a ultimately a struggle of values, not interests.

While Sanders regularly rails against "the 1%", he seldom identifies himself with "the 99%." More importantly, the main division in Sanders' discourse is one ofinterests, i.e. of class struggle, not morality. When he criticizes that the top 0.1% of US society have almost as much wealth as the bottom 90%, he deplores the morality of that situation rather than of the 0.1%. Incidentally, he does so based onsolid studies. His critique is mostly institutional rather than individual. For example, he vows to take on "the greed" of "corporate America" and of "Wall Street." This perfectly fits with his overarching ideological narrative - which he calls, misguidedly, "democratic socialism" - that is built around class interests.

Similarly, Trump has adopted part of the populist message of the Tea Party, criticizing both the Democratic and Republican establishments for incompetence and for being in the pockets of big donors. He also rails against an alleged liberal "political correctness" and claims to break "political taboos" like illegal immigration - as if we haven't just had years of nativist discourse surrounding the various anti-immigration legislation starting with SB1070 in Arizona in 2010. Like many Republicans before him, including presidents Nixon and Reagan, Trump claims to speak for "the silent majority" that wants to "take our country back" (from whom remains a bit unclear).

However, whereas Trump is clear on the corruption, although even more incompetence, of the homogeneous elite, making little distinction between Democrats and Republicans, he only heralds "the people" when he thinks they support him. Overall, he speaks little about the virtues of "the people." What Trump speaks about, over and over again, is Trump. Where populist leaders claim to be the vox populi, the voice of the people, Trump is the voice of Trump. He does not claim to follow the wisdom of the people, as an integral part of that homogeneous people. He argues that he is the best CEO for "America" because he has unique skills and experiences.

In typical elitist fashion The Donald claims to be different, and yes better, than the (common) people. Note this recent statement on Meet the Press last month: "I am a conservative, but I get along with people." Leaving aside his (unconvincing) claim to conservatism, he implicitly separates himself, and conservatives more general, from (the) people. Trump doesn't claim to be "one of the people," as (real) populists do, but that, despite the fact that he is different, people love him. And while he here implicitly refers to white people, the bulk of his base, he uses similar language with regard to ethnic minorities, from Hispanics to African Americans, who all "love" him (despite that he is different from them).

This is all not to say that populism is not underlying some of the support for both Sanders and Trump - it is. But there is nothing new to that. In fact, one could argue that it simply reflects the broader movement that Occupy Wall Street and the Tea Party started a few years ago. More important, however, is that neither Sanders nor Trump are populist politicians. Sanders is an American social democrat, mixingAmerican and European traditions of progressive politics, while Trump is the latest of that all-American brand of businessman savior - well, at least until Michael Bloomberg jumps into the race. Hence, while using the term populism might help taint their campaigns, and sell newspapers, it does not help us that much in understanding the true political programs of these two politicians.

Bloggposten The Power of Populism? Not Really! ble først publisert i The Huffington post

Cas Mudde is an Associate Professor in the School of Public and International Affairs at the University of Georgia (USA) and adjuct researcher at C-REX. He publishes broadly on politics in Europe, Israel, and North America with a particular focus on (the interaction between) extremism and democracy. His main research agenda is informed by the question: How can liberal democracies protect themselves from political challengers without undermining their own core values?