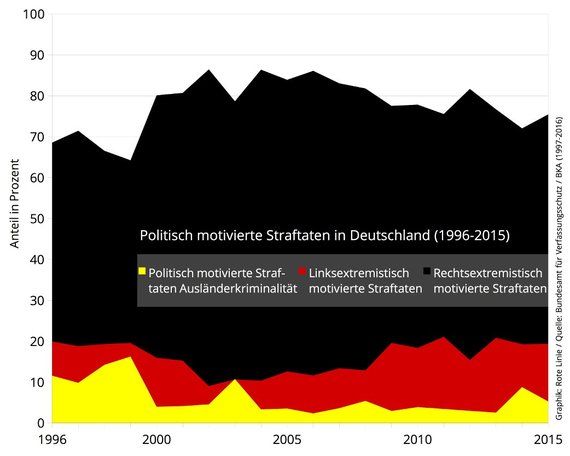 Yesterday I tweeted this graph of “politically motivated crimes” in Germany in the period 2006-2015. The graph comes from Rote Linie and is based on data provided by the Federal Bureau for the Protection of the Constitution (Bundesamt für Verfassungsschutz, BfV) and the Federal Criminal Police Office (Bundeskriminalamt, BKA), the two state agencies responsible for politically motivated crimes. It is a powerful graph, but clearly also a very confusing one, based on the many interpretations and responses I saw in my Twitter feed. So, I decided to provide a quick and concise clarification and context.

What the graph does say

Second, while there are some fluctuations, the pattern is extremely stable. Overall, politically motivated crimes by foreigners have decreased somewhat, while those by the far left and far right have increased somewhat. But the far right has been responsible for three to four times as many politically motivated crimes than either the far left or foreigners in each individual year!

Third, contrary to some alarmist media reporting, politically motivated crime by foreigners has not spiked as a consequence of the “refugees crisis” — at least not in 2015, the last year that is covered by the data. This clearly has created significant cognitive dissonance among my (many) Islamophobic and xenophobic Twitter followers, who refer to all kind of imagined and real crimes by foreigners and asylum seekers, preferably the sexual assaults in Cologne on New Year’s Eve.

What the graph does not say

Leaving aside the fact that the Cologne assaults (and robberies) were mostly committed (and reported) in 2016, and not in 2015, they were not politically motivated — except when you operate on the (racist) premise that (non-white) foreigners sexually assault (white) German women to make a political point! In other words, this graph says little about the crime rates among citizens and foreigners in Germany — let alone among “natives” and “others” (Muslims) in Germany.

However, we do have other studies that show that the crime levels are, in general, higher among foreigners than among citizens in Germany, but that foreign workers are less criminal if socio-demographic factors like class and gender are taken into account. Similarly, recent data show that asylum seekers are overall not more criminal than Germans and that the recent spike in the number of asylum seekers has not led to a proportional spike in crimes by asylum seekers — leaving aside the specific “crime” of illegal entry. Moreover, while certain groups of asylum seekers are overrepresented in crimes (mostly those from the Balkans and the Maghreb), asylum seekers from Afghanistan, Iraq and Syria are “clearly underrepresented.”

It is important to note, however, that this is at least in part a direct consequence of the specific legal context of Germany, which, as a so-called “militant democracy” (Wehrhafte Demokratie) is particularly repressive towards the far right and has strict anti-discrimination legislation that targets almost exclusively the right. For example, while it is illegal to deny Nazi crimes like the Holocaust, it is not illegal to deny communist crimes like the Cambodian or Ukrainian genocides. This explains, at least in part, the significantly higher number of so-called “propaganda crimes” (Propagandadelikte) of the far right in Germany.

Somewhat surprisingly, the actual number of violent crimes is often higher for the far left than for the far right. In 2014 they were roughly equal (990 and 995, respectively), but in 2015 both exploded to 1,408 far right and 1,608 far left. They do differ strongly in their targets, however. While the majority of far left violence is directed at the police and security authorities (1,032), the far right mainly targets “foreigners” (918). In addition, they target each other: there were 833 far left attacks on (real or supposed) right-wing extremists and 252 far right attacks on (real or supposed) left-wing extremists. Note: attacks can be counted to have multiple targets!

Finally, the graph doesn’t say much about the deadliness of the different groups. With regard to the last two years, the number of attempted homicides has been very low among all groups. Again, the far left was highest, with seven in 2014 and eight in 2015. But where attempted homicides by foreigners decreased significantly, from six in 2014 to three in 2015, among the far right they exploded, from one to eight, equaling the number of the far left.

But however advanced the German state might be, there are still more than enough problems. Most importantly, crimes by foreigners, politically motivated or not, are more likely to be registered than those by citizens — and those by “immigrants” (a term also often used for second- and even third-generation) more than those by “natives” (often meant for white Germans). Similarly, as the disastrous case of the National Socialist Underground (Nationalsozialistischer Untergrund, NSU) has recently showed again, far right crimes are most likely much more under-registered than other politically motivated crimes. All this being said, we can make at least the following observations:

The overrepresentation of the far right is almost exclusively in non-violent crimes.

This is to a large extent a consequence of the specific legal situation.

There is no doubt that far right crimes are much more numerous than other politically motivated crimes.

The “refugees crisis” has indeed led to a rise in crime, but more so by the German far right than by the (Syrian) asylum seekers.