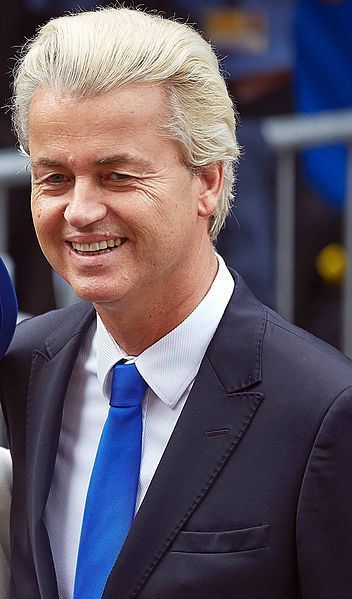 Wilders entered Dutch politics as a member of the conservative People's Party for Freedom and Democracy (VVD), but left the party after his increased criticism had marginalized his position within the parliamentary faction. After a short period in the Second Chamber as the "Group Wilders" (a group of one), he founded the PVV - which still operates as part of the Foundation Group Wilders, with one sole member (Wilders).

Few politicians have influenced Dutch politics so profoundly in such a short period of time as Wilders. While he is often compared to Pim Fortuyn, the flamboyant gay politicians who was murdered in May 2002, Wilders is a very different type of person and politician. In fact, Fortuyn's influence is much less ideological than organizational. It was the short history of the List Pim Fortuyn (LPF), which descended into utter anarchy after Fortuyn's death, that convinced Wilders to maintain total control of his new party. This leads to the bizarre situation, at least in the European context, in which all but one of the PVV representatives in the various sub-national, national, and supra-national parliaments are not members of the political party they represent.

While the dominance and omnipresence of Geert Wilders give a strong impression of stability, the PVV has actually had a whirlwind of a first decade. With the exception of the leadership position, very little has stayed the same. Most notably, there have been three major, and closely related, changes: ideological, electoral, and political.

Ideology: From Conservatism to the Populist Radical Right

The ideology of the PVV has changed fundamentally in the past ten years, even if Wilders tends to deny that. As the Dutch historian Koen Vossen has shown, the party started out as a "VVD+," i.e. a conservative-liberal party with strong Islamophobia. In the first years the PVV became more neoconservative, combining still mostly neoliberal economics with a hawkish foreign policy (informed by Islamophobia), but it was not radical right yet. In fact, even in 2010 Wilders was still closer to the VVD than to the French National Front (FN). This has changed radically in the last years.

The PVV has adopted an increasingly ethno-nationalist discourse, built around the imaginary prototypical Dutch couple "Henk and Ingrid," who are allegedly threatened by a bureaucratic Brussels (EU), corrupt national elites, mooching immigrants (including East Europeans), and Islamic terrorists. Today the PVV is a standard populist radical right party, combining nativism, authoritarianism, and populism. It has hardened its European policy - wanting the Netherlands to leave the EU- and softened its economic policy - by more openly advocating welfare chauvinism in campaigns, while still mostly voting for neoliberal policies in parliament. It only stands out from other populist radical right parties like the Austrian Freedom Party (FPÖ) and the FN in its level of obsession with Islam and Muslims, which remains the prime focus of Wilders - not unrelated to the fact that he has been living under 24/7 state protection from Islamic extremists for more than ten years now.

Electoral: From the Margins to the Masses

The electoral growth of the PVV has been both rocky and steady. The party goes through rises and falls in the polls but overall experiences an upward trend. Its support base has changed slightly; like its ideology its electorate now largely mirrors that of other populist radical right parties (i.e. predominantly male, less educated, working class). Unsurprisingly, the party profits from (European) crises like the Greek economic crisis and the refugee crisis, which Wilders uses to attack both the EU and national elites.

Scandals seem to affect him much less than his opponents think, however. For example, when Wilders made his supporters shout "less, less, less" (Moroccans) at a party rally in March 2014, almost everyone thought that he had gone too far this time. However, this didn't include the vast majority of PVV supporters, who saw little problem with the statement - which was, as Wilders correctly stated, completely in line with the PVV program.

But while support for the party has increased steadily over the past years, Wilders has been king of the polls, bot not of the elections. Both in the 2012 Dutch elections and in the 2014 European elections the PVV did (much) less well than it had done in the polls in the months before. Perhaps this is the only silver lining opponents can take from the recent polls, which all show that the PVV is the largest party in the Netherlands.

Political: From the Mainstream to the Margins

Ironically, the electoral growth has not strengthened the PVV's political position. Wilders started out as a mainstream politician, slightly to the right of the VVD, who kept his distance from radical right groups and parties in the Netherlands and abroad. He defined politics in very narrow terms, i.e. parliamentary politics, and had as his only aim to create a right-wing coalition government to break the age-old centrist tendencies of Dutch politics.

He achieved this in 2010, when the PVV supported a minority government between the center-right Christian Democratic Appeal (CDA) and the right-wing VVD - under the leadership of VVD leader and Prime Minister Mark Rutte. But after two years he pulled the plug on that coalition, as VVD and particularly CDA demanded further concessions that meant (even) more election promises. As always in Dutch politics, the party that is perceived to have created chaos, such as break up the government, paid the electoral price: PVV lost a third of its electorate, going from 15.5 percent in 2010 to 10.1 percent in 2012.

Since being back in opposition the PVV has not just radicalized ideologically but also politically. Over the past years Wilders has made significant strategic changes. For example, after having reserved his anti-establishment attacks mainly for left-wing parties, the Labour Party (PvdA) in particular, Wilders has started a relentless barrage of personal attacks on right-wing politicians in 2012, specifically aimed at his former ally, Dutch Prime Minister Rutte.

Marginalized at the national level, Wilders surprised many by embracing the new FN leader, Marine Le Pen, at the European level. After a first attempt in the unsuccessful European Alliance for Freedom (EAF), the PVV is now a member of an official political group in the European Parliament, the Europe of Nations and Freedoms (ENF) - together with, most notably, the FPÖ, the Belgian Flemish Interest (VB), and the Italian Northern League (LN) -all parties that Wilders had denounced as "anti-Semitic" and "far right" until a few years earlier.

Finally, Wilders is increasingly supporting extra-parliamentary politics, although mostly outside of the Netherlands. He is the main speaker for Global Islamophobia Inc, speaking at meetings of anti-Islam groups around the globe. Last year alone Wilders spoke for the American Freedom Defence Initiative (AFDI) in Garland (TX), the Australian Liberty Alliance (ALA) in Perth, and the Patriotic Europeans Against the Islamization of the West (better known as Pegida) in its (only) stronghold of Dresden (Germany).

All of these changes have brought Wilders and the PVV many new supporters around the world, including in the Netherlands, but not among the people he needs to get into political power. In fact, despite being at an all-time high in the polls, Wilders seems further away from government participation than ever before. As a professional politician, he realizes this, of course. But rather than responding by moderating, he has radicalized even further. In recent statements he has claimed that, as the biggest party in the Netherlands, the PVV cannot be excluded from the next government. More ominously, Wilders threatened with a (suitably vague) "revolt" in the case the other (right-wing) parties would exclude him from power.

Whatever the future holds, the PVV has already made a major mark on Dutch politics in its first ten years. It is by far the most popular and powerful radical right party in Dutch postwar history. Still, for all its fundamental changes, the PVV remains dependent on one single man: the most visible Dutch politician, inside and outside of the Netherlands.

Cas Mudde is an Associate Professor in the School of Public and International Affairs at the University of Georgia (USA) and adjuct researcher at C-REX.