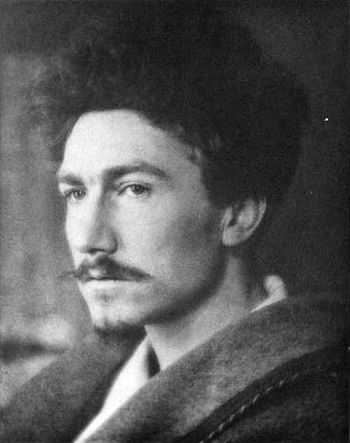 The still young American poet left his homeland in 1908 only for the sake of his art. After having lived in England and France, Pound travelled to Italy, but what was supposed to be a simple study trip led him to a lifelong commitment. There, beside the poetry, he became progressively involved in politics and embraced fascism.

During the thirties and until the end of WWII, the leading modernist worked assiduously in support of Mussolini and his regime. Because of this work of propaganda for Italian Fascism, and especially his notorious radio broadcasts, Pound was accused of treason against his fatherland. The court found him unfit to stand trial and interned the eminent author of The Cantos in a psychiatric hospital for more than 12 years.

After his release Pound returned to Italy, where he lived the rest of life in a sort of voluntary withdrawal from politics. His political thought, however, inspired and continues to inspire many activists who take Pound's life and works as an example to follow. The case of the unabashedly fascist movement CasaPound Italia is only the most evident example of his legacies, but Pound’s influence in today’s politics is wider indeed.

Andrea Rinaldi is Research Fellow at the University of Bergen, and is currently writing a PhD Thesis on Ezra Pound and Religions: Occultism, Christianity, Fascism