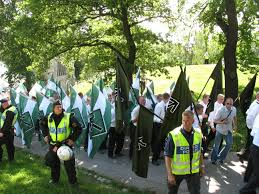 Far right mobilization refers to the process by which a group of individuals with far right ideals gets together as a collective actor in order to trigger or oppose social change.[1] The far right can use different strategies to pursue its goals, including participating in elections, making political statements offline and online, as well as deploying demonstrative, confrontational, and violent tactics.[2] No single explanation can account, in and by itself, for a process as broad and diverse as far right mobilization, the specific form it takes, and its outcomes. We focus here on the combination of three main factors: a) The societal and political context, which may or may not create favorable circumstances for far right movements and parties; b) group-level factors, such as resources, networks, and communication; and c) the profile and motivations of activists, which explain why and when individuals take part in far right collective action.

Far right mobilization is part of its sociocultural and political setting. This means that contextual circumstances shape, but also is shaped in return, by far right collective action. Two explanations address this relationship. According to so-called “grievance” theories, far right mobilization is the result of marginalized and socially excluded groups experiencing high deprivation, notably during economic hardship or periods of high insecurity related to crime or corruption.[3] For example, the emergence of the French Front National (now Rassemblement national) in the 1970s, and the wave of extreme right violence in the 1990s, is explained by the feeling of competition between “natives” and migrants generated by globalization and modernization.[4]

Proponents of “resource-mobilization” theory, in contrast, focus on the capacity of collective actors to turn these grievances into action.[5] The appearance of new challengers would thus rest on the available opportunities in a given context. So-called “political opportunity structures”[6] that encourage people to mobilize include political factors linked to the openness of the political system and the presence of potential allies, measured by i.e., the strength of political elites and the nature of the electoral system. In addition, so-called “discursive opportunities” include cultural and discursive factors like the salience and tone of public debates on migration, legal restrictions on hate speech, as well as a country’s citizenship regimes and authoritarian legacy.[7]

While the two theories help make sense of far right mobilization in both elections and the streets, the relationship between far right parties and movements is contested. Some, in fact, suggest that far right actors normally prefer running for elections and only resort to protest politics when they are not firmly established in the party system, such as in Spain until the breakthrough of the Vox party. Others argue that the right waxes and wanes at the same time in both elections and the streets, as illustrated by the joint emergence of Alternative für Deutschland and PEGIDA in Germany, and particularly the Eastern state of Saxony.[8]

Far right mobilization also depends on group-level factors, three of which hold special importance. First, mobilization strategies rest on various types of resources that far right actors may possess, including financial means, but also credibility, legitimacy, and knowledge. For instance, groups that are mainly shaped by the personality and resources of their leader, such as the Dutch Geert Wilders’ Partij voor de Vrijheid (PVV, or Party for Freedom), often mobilize via elections because they lack a social base to support mass protest. On the contrary, organizations that do not possess professional skills and/or a widespread legitimacy, such as the English Defence League (EDL) in the UK, generally remain grassroots and do not take part in elections.

Second, mobilization depends on the way far right actors are organized internally, and on the social networks they can count on externally, which shape if and how people participate in far right protest or join far right parties.[9] While established far-right parties conform to some extent to conventional forms of party organization, informal groups are generally organized according to the personal characteristics and charisma of the leaders: often resulting in strictly hierarchical structures that enforce leaders’ decisions on all group members.[10] Externally, they seek to build networks to increase communication among supporters and facilitate coordination and effectiveness of mobilization, notably via “cyberactivism” and social media.[11]

Finally, mobilization depends on whether far right groups manage to attract broader audiences to their cause, for example through attaining visibility, resonance and legitimacy in the mainstream media.[12] If they promote identities that are too narrow, or too exclusive, far right groups may trigger solidarity within their own circles, but at the same time alienate the majority of potential supporters. Large-scale mobilization, either in the street or in elections, is possible if far right narratives are, at the same time, effective in summarizing their political views, resonating with broader understandings of public problems, and inclusive enough so that they can be applied by many groups in different contexts, as illustrated for instance by the global anti-Muslim movement.[13]

We can distinguish two broad individual-level explanations of far right mobilization, focusing on rational choice, and psychosocial or emotional factors. Before discussing these two broad explanations in more depth, it is important to note that, while unfolding at the individual level, these processes are often the result of the deliberate efforts of far right groups and networks.

First, far right mobilization may be the result of individuals’ rational calculations, as activists and voters are not ‘driven by irrational impulses’,[14] but rather by a perception of threat that perceived enemies (notably migrants and other minorities) would pose to their socioeconomic status and “way of life”. Far right mobilization would thus be the aggregate result of individual choices of people with specific grievances or attitudes. This explanation is particularly effective in addressing why people vote for far right political parties, but fails to account for why only a relatively small share of people holding anti-immigrant opinions engage in high-risk activism, contentious politics, or violence.[15] These choices might in fact stem from the combination of cost-benefit calculations and other individual-level factors, such as personal and/or professional constraints.[16]

The second explanation points at psychosocial and emotional factors. For instance, some specific factors apply to men in particular, arguably because far right mobilization, particularly violence, is a gendered phenomenon. The over-representation of men in extreme right movements partly owes to the capacity of these groups to provide emotional support, male comradeship, and a sense of collective belonging.[17] Similarly, far right mobilization is linked to psychological factors, such as a perceived ‘loss of masculinity’, especially among young men who try to “regain” it through collective action, and notably violence.[18]