Seyla Benhabib gave The ARENA Lecture 2 May 2012 on 'Challenges to cosmopolitanism in Europe'. 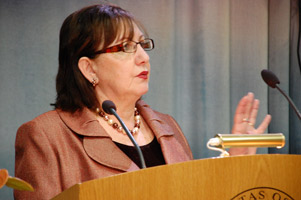 Benhabib spoke on the challenges ideas of world citizenship, or cosmopolitanism, meet in a Europe marked by crises, inequality, culture clash and euroscepticism.

Benhabib has concerned herself with issues related to multiculturalism and cosmopolitanism. In her latest book, Dignity in adversity, she gives an answer to criticism that cosmopolitans are "dead souls" or universalist out of touch with ordinary citizens and their concerns.

So what is cosmopolitanism? Is there a basis for such a doctrine in the present situation where we on one side see the emergence of a narrow nationalism and xenophobia and on the other side a soulless and increasingly far-reaching neo-liberalism?

What is the relationship between democracy and cosmopolitanism? Benhabib emphasises the value of a cosmopolitanism without illusions, which actively relates itself to diversity and inequality and that is rooted in the notion of man as a moral being entitled to rights by virtue of being human.

The ARENA Lecture: A longstanding tradition

ARENA lecture has become a tradition at the University of Oslo. In this lecture series ARENA invites politicians and other influential persons to hold an open lecture on a topic that is both academically interesting and of public interest.