The Politics of Legitimation in the European Union: Legitimacy Recovered?

Christopher Lord and Jarle Trondal have co-edited the book The Politics of Legitimation in the European Union: Legitimacy Recovered? with additional contributions from ARENA's PLATO early stage researchers Claire Godet and Joris Melman. 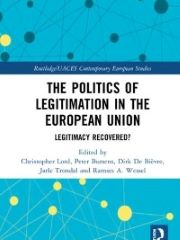 This book examines and investigates the legitimacy of the European Union by acknowledging the importance of variation across actors, institutions, audiences, and context. It is a key outcome of the ARENA-coordinated MSCA Innovative Training Network Post-Crisis Legitimacy of the European Union (PLATO). It is edited by the project's scientific coordinator Christopher Lord in cooperation with supervisors Peter Bursens, Dirk De Bièvre, Jarle Trondal and Ramses A. Wessel.

Case studies reveal how different actors have contributed to the politics of (re)legitimating the European Union in response to multiple recent problems in European integration. The case studies look specifically at stakeholder interests, social groups, officials, judges, the media and other actors external to the Union. With this, the book develops a better understanding of how the politics of legitimating the Union are actor-dependent, context-dependent and problem-dependent.

This book will be of key interest to scholars and students of European integration, as well as those interested in legitimacy and democracy beyond the state from a point of view of political science, political sociology and the social sciences more broadly.

Contributions by ARENA's researcher are listed below, for a complete overview go to Routledge.

This introduction presents an overview of the key concepts discussed in the subsequent chapters of this book. The book discusses the politics of legitimating the European Union (EU). It traces the gradual emergence of citizens from the shadows into the foreground of the politics of the Union and of theories of European integration. The book then demonstrates that fear, hope, doubt, love, hate, identity, indifference and trust are all part of a cocktail of emotions that influence how claims to legitimate the Union are received by citizens. It also argues that non-compliance with the Dublin Convention and the Common European Asylum System during the migration crisis of 2015 did not lead to wider erosion of border-free Europe or of the Union’s co-ordination of its external boundaries. The book investigates how far the European Commission’s decision on state aid to Apple was contested by the Irish government and predominantly national media.

Conflating policy, democracy and legitimacy: The case of stakeholder involvement

This chapter identifies a fundamental problem in the politics of legitimating the European Union. Legitimacy is a social relationship between an authority and its constituency which only exists when the constituency accepts the norms that justify the authority. Yet that relationship may not pre-exist a political authority or develop spontaneously. Rather authorities may need to employ legitimation strategies to build social relationships with constituencies. The EU may be especially dependent on building its legitimacy ‘endogenously’. But legitimation strategies can go wrong. They can also be based on mistaken assumptions about conditions under which constituencies will accept an authority as legitimate. A good example of difficulties legitimation strategies can encounter are attempts to legitimate the Union through stakeholder involvement. Stakeholder involvement cannot on its own solve problems of representation, accountability or effectiveness.

How do citizens make sense of the European Union? How far do citizens understand themselves as citizens of the Union and as members of a public that is a public of the European Union? How, more generally, do citizens understand power, justifications for power, systems of government, and abstract forms of collectivity such as political community? It is hard to devise methods of answering those questions that are not limited by their empirical and normative presuppositions. Opinion surveys frame questions in particular ways. Political philosophers assume norms and standards even where they evaluate political orders by what they take to be citizens’ own values. The chapter argues for focus groups of a kind that would allow citizens to do more to explore and justify for themselves what they think and feel about questions of European integration.

Polycrisis and Resilience in the EU: Covid-19 and avenues for future studies

The many actors of direct and indirect legitimacy

Although the Union has few coercive powers of its own, it changes how member states coerce their own publics. It changes the nature of public coercive authority for citizens of democracies that are member states of the EU. All that, in turn, is shaped by a need for some body such as the European Union to manage externalities between member state democracies if the latter are to deliver their own obligations to their own publics to secure rights, justice, freedom from arbitrary domination and democracy itself. One consequence is to corrode any assumption that direct and indirect legitimacy of the Union require different actor combinations. Deriving or borrowing the legitimacy of the Union indirectly from its member state democracies now also requires the ‘full range’ of democratic actors: citizens, voters, parliaments, parties, civil society and the media. Hence, the importance of this book in developing case studies in how actors respond to problems in the legitimacy and legitimation of the Union.

The politics of legitimacy – that is processes of legitimation – are potentially subject to agency and intervention. Legitimacy-conferring elements of the policy process may be subject to deliberate intervention through redesigning institutions. An institutional approach emphasises how decision processes and human behavior respond to a set of fairly stable organisational routines. Stable premises for behavioral choices are past experiences encoded in rules and expressed in the organisational structure of a government apparatus. Organisational characteristics of a polity are thus likely to variously enable and constrain governance processes, making some policy choices more likely than others. The European Union remains distinctive as a non-state, multi-democracy, multi-demoi political order that exercises power from beyond the state. Political orders can also have their own distinctive standards, and even biases, in legitimation by institutional design. The Union’s crisis politics meets its tortoise politics: its responses to crisis may even reinforce its everyday routines.

Chapter 13: Polycrisis and Resilience in the EU: Covid-19 and avenues for future studies
Jarle Trondal, Marianne Riddervold and Akasemi Newsome

Chapter 14: The many actors of direct and indirect legitimacy
Christopher Lord