Daniel Naurin has published a new article on how to measure bias in the interest group system, co-authored with Frida Boräng (Uni. Gothenburg). 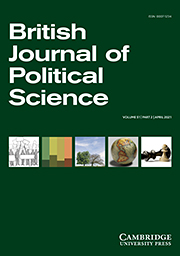 The interest group literature has long struggled with how to empirically approach the normative idea of a non-biased group system. While most previous attempts have focused on the descriptive representation of different types of groups, this article argues that substantive representation of citizens' attitudes is closer to the democratic principle of equal effective participation. It develops a methodological approach that captures substantive representation with respect to agenda priorities and policies by surveying interest groups on how much time they spend on lobbying in different policy areas, and in which direction they lobby on salient policy issues. The responses are compared with opinion data to estimate the level of political (in)equality. The findings from the case of Sweden – where relatively high levels of equality would be expected, but striking levels of inequality based on socio-economic status are instead found – highlight the perseverance of what Schattschneider once called the upper-class bias of the pressure system.