Governance by Hybrid Advisory Committees – A Hallmark of Social Democracy?

Eva Krick and Cathrine Holst have contributed with a chapter entitled 'Governance by Hybrid Advisory Committees – A Hallmark of Social Democracy?' in the book Social Democracy in the 21st Century. 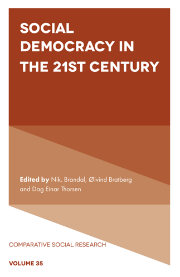 Contributors to this book explore essential questions for contemporary social democrats, such as;What does social democracy constitute as a set of ideas in the 21st century experiencing rapid technological, economic and demographic change?Is the narrative of the decline of social democracy warranted, and is there an opportunity for transformation or even rejuvenation? Social Democracy in the 21st Century is an essential reading for academics and researchers of political science and sociology.

Governance by Hybrid Advisory Committees – A Hallmark of Social Democracy?

This study focuses on ad hoc policy advisory committees that bring together experts and stakeholders to propose public policies on the basis of consensus. These kinds of committees are often considered to be a typical governance mechanism of the social democratic model of regulation and policy-making known from the Nordic countries. We challenge this view by comparing the Norwegian system of committee governance with those of Germany and the European Union and point out the central role of coordination and consensus in all three systems.

Relying on existing and original research, and contrary to the assumption of a distinct Nordic regime, we find significant similarities between the three committee governance systems when it comes to organisational features, the kind of expertise produced and the committees' governance functions. Most remarkable is the prevalence of hybrid, tripartite committees that draw together interest groups, civil servants and researchers in all three systems. We show that these kinds of ad hoc advisory committees tend to generate a kind of coordinated, negotiated expertise where notions of validity and objectivity are connected not only to cognitive quality but also to the breadth of viewpoints that are integrated. Moreover, the Nordic committee system of Norway stands out with only few distinctive qualities, and it is not obvious how the notion of ‘social democracy’ helps illuminating these features.

To help shed light on the striking resemblances we find across systems, we develop a notion of consensus-oriented political and epistemological systems, which may be a useful complement to the notion of Nordic social democracy.