Democracy at the EU level: Folly or necessity? More work for a directly elected European Parliament

Chris Lord has authored an article in the European Law Journal. The article argues that reverse dependence between member states and the European Union provides an additional justification for a directly elected European Parliament. 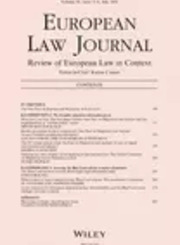 It is often argued that the European Union needs legitimation by its Member State democracies. However, there is also a reverse dependence in which Member State democracies need some kind of European Union if they are to manage externalities between themselves in ways that are needed to deliver their most fundamental obligations to their own publics to secure rights, justice, freedom from arbitrary domination and democracy itself. I argue that reverse dependence provides an additional justification for a directly elected European Parliament: namely, as an aid to national democracies in their oversight of Union decisions. The future of Europe debates should consider a directly elected Parliament as a means of connecting national democracies to the Union and not just of building representative institutions at the European level.