Helene Sjursen and Guri Rosén have published a chapter on the EU’s Response to the Crisis in Ukraine in the new book European-Russian Power Relations in Turbulent Times. 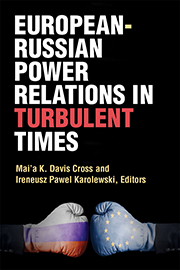 The Russia-Europe relationship is deteriorating, signaling the darkest era yet in security on the continent since the end of the Cold War. In addition, the growing influence of the Trump administration has destabilized the transatlantic security community, compelling Europe—especially the European Union—to rethink its relations with Russia.

The volume editors’ primary goal is to illuminate the nature of the deteriorating security relationship between Europe and Russia, and the key implications for its future. While the book is timely, the editors and contributors also draw out long-term lessons from this era of diplomatic degeneration to show how increasing cooperation between two regions can devolve into rapidly escalating conflict. While it is possible that the relationship between Russia and Europe can ultimately be restored, it is also necessary to understand why it was undermined in the first place. The fact that these transformations occur under the backdrop of an uncertain transatlantic relationship makes this investigation all the more pressing.

Each chapter in this volume addresses three dimensions of the problem: first, how and why the power status quo that had existed since the end of the Cold War has changed in recent years, as evidenced by Russia’s newly aggressive posturing; second, the extent to which the EU’s power has been enabled or constrained in light of Russia’s actions; and third, the risks entailed in Europe’s reactive power—that is, the tendency to act after-the-fact instead of proactively toward Russia—in light of the transatlantic divide under Trump.

Helene Sjursen and Guri Rosén discuss why cohesion was achieved with regard to the crisis in Ukraine and, more specifically, why the EU member states managed to agree on imposing sanctions against Russia. What enabled this agreement to come about?

Helene Sjursen og Guri Rosen
Arguing sanctions. On the EU’s response to the crisis in Ukraine