Two chapters in The Palgrave Handbook of European Referendums

ARENA researchers have contributed with two chapters in The Palgrave Handbook of European Referendums: Christopher Lord on referendums and democratic theory, and John Erik Fossum and Guri Rosén on the Norwegian EU referendums. 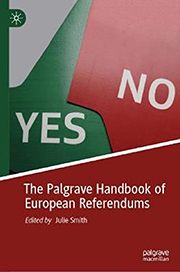 This handbook provides an empirically rich analysis of referendums in Europe from the end of the Second World War to the present. It addresses a range of perennial theoretical and legal questions that face policy-makers when they offer citizens the chance to take or influence decisions by referendum, not least whether to accept the ‘will of the people’. Taking a multi-disciplinary approach, drawing on historical, philosophical and political science perspectives, the book includes a contextual section on the history of referendums, the theoretical questions underpinning their use, and on constitutional and legal questions about the use of referendums. The empirical sections are divided into those referendums that focus on domestic issues, such as constitutional matters or questions of social policy, and those related to the European Union, including membership referendums and treaty ratification.

Are justifications for democracy more likely to be delivered with referendums or without them? Are referendums more likely to satisfy some democratic standards than others? Why do people disagree so much about the desirability of referendums? This chapter discusses what referendums may mean for aggregative, deliberative and epistemic aspects of democracy, as well as concerns that referendums risk manipulation, political irresponsibility and majority domination. Yet, the chapter also doubts that any democratic system can manage without some provision for referendums. Securing the benefits of referendums without too many of their shortcomings then requires embedding them in the very practices of democratic constitutionalism and representative democracy that are often understood as opposites to referendums.

The focus of this chapter is on Norway’s two EU referendums. We have chosen to focus on these referendums, because, firstly, they are the only two national referendums that have taken place after the consolidation of the Norwegian party system; secondly, questions of membership and treaty change are the most frequent triggers of referendums in Europe; and, thirdly, some argue that the EU referendums in Norway have staked out a new constitutional practice because a potential third referendum would be both ‘politically and probably also constitutionally compulsory’ (Wyller 2006: 29, authors’ translation).

In: The Palgrave Handbook of European Referendums
Julie Smith (ed.)