Journalism, Truth and the Restoration of Trust in Democracy: The EU's Anti-fake News Strategy from a Public Sphere Perspective 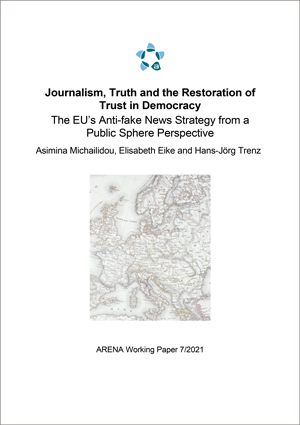 Disrupted public spheres are commonly characterized by misinformation and fragmentation in terms of dissonance and disconnections of public debates that are not conducive to public will formation. Such a disruption of public will formation processes has damaging effects on democracy in terms of truth, inclusion and freedom of expression. Trust in journalism in Europe and beyond has been undermined by a series of scandals, by the closeness of journalists to political parties and government, but also by more frequent attacks against freedom of speech and of the press run especially by populist leaders and new authoritarian governments. In our chapter, we critically discuss the responses, i.e. counter-strategies, for trust-(re)building that this disruption triggers, from a top-down EU policy perspective. In some countries, like Hungary, Poland and Italy, the press freedom index is in steep decline and governments have also entered a ‘war’ with journalism, putting increasing pressure on the free exercise of the profession, restricting budgets and the autonomy of public service broadcasting. We assess the EU’s response to the authoritarian and fake news challenge and discuss the limits of a voluntary approach in light of public sphere standards.