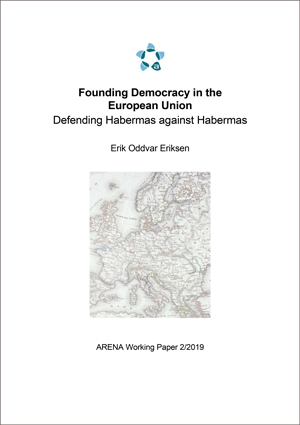 Is democracy beyond the nation state possible? How to give a justificatory account of the European Union? This paper takes issue with Jürgen Habermas’ plea for a constitutionalised rule-of-law regime at the international level and the idea of the EU as a federation of nation states based on a mixed constituent power. The basis for the criticism is Habermas’ original theory on constitution making, which has strong cosmopolitan implications. The EU is already more than what the justificatory template of ‘originally shared’ popular sovereignty allows for. The European Treaties have achieved the function of a superior legal structure, which establishes both a unitary European citizenry distinct from national ones and a set of autonomous European bodies. The template of ‘originally shared’ popular sovereignty risks pre-empting democracy. The paper also questions Habermas’ revision of the concept of solidarity in light of his original conceptualisation as well as in light of the present crisis of the EU.