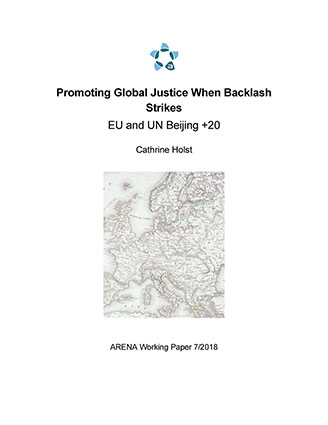 The UN Beijing World Conference on Women in 1995 was a landmark event resulting in the famous Beijing Declaration and Platform of Action. In 2015, a review of the implementation of the 1995 Beijing agenda—Beijing +20—was conducted by the United Nations Commission on the Status of Women (CSW), culminating in a CSW conference in New York. Equipped with a typology of three global justice conceptions—global justice as non-domination, as impartiality, and as mutual recognition—the paper utilises publicly available documents, media reports, and interviews with civil society representatives and gender experts, to identify underlying normative ideas of the Beijing +20 process and the EU’s approach. A comparison is made with the process and the global justice conceptions central to the Beijing Declaration and the EU’s role at the Beijing World Conference. Findings show that the EU’s role as a promoter of impartial global justice was limited in the Beijing +20 process, and that justice as non-domination prevails as a strong organising principle. This represents a shift from the original Beijing path that arguably had a firmer basis in ideas of justice as impartiality. Also the noteworthy commitment to global justice as mutual recognition, which characterised both the Beijing 1995 documents and the processes in which they came about, was far less pronounced twenty years later, despite the EU’s declared ambitions to include civil society and ally with women’s rights advocates. These troublesome developments likely reflect a global political climate that is less gender equality friendly, and where established lines between low and high salience are becoming more unclear. This can potentially, and perhaps increasingly, turn gender policy into ‘big politics’. In addition, the EU’s ability and motivation to act as a progressive entrepreneur in the gender equality area may be diminishing as a result of internal developments in the Union.