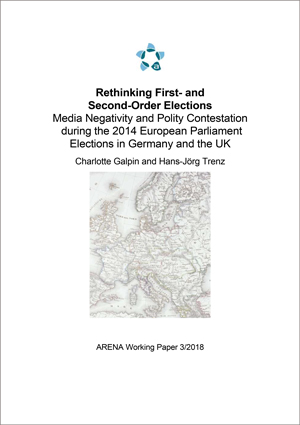 European Parliament (EP) elections have been considered a mechanism to create an engaged European public. Traditionally, a distinction has been made between first- and second-order elections, where politicised first-order European elections see EU issues debated and contested by European actors. Despite many years of EP elections and new strategies such as the Spitzenkandidaten campaign, a historic number of Eurosceptic parties entered the EP in 2014. The politicisation of EP elections therefore seems to have taken place along identitarian lines rather than traditional partisan divisions. We argue that the traditional distinction between first- and second-order elections is insufficient to capture the public sphere dynamics of politicised EP elections, where debates over the fundamental legitimacy of the EU can transform into first- and second-order ‘Eurosceptic’ public spheres. We identify two interrelated media biases that intervene to shape the nature of EP election debates: a media negativity bias in the selection and framing of EU news and a media polity bias that privileges contestation of the constitutional make-up of the EU over political and policy-based debates. We therefore develop a typology of EP election campaigns that also distinguishes between types of conflict (politics and polity) and degrees of Europeanisation (second-order and first-order campaigns).

To investigate this empirically, we analyse EP election news during the 2014 European Parliament elections, taking Germany and the UK as ideal-type cases. We find that the UK news demonstrates a strong negative bias towards the EU polity, remaining at the same time a primarily second-order campaign, whereas in Germany EP debates focus more strongly on EU politics and policies and in fact demonstrate a positivity bias with regard to assessments of the legitimacy of the EU polity. The German case is therefore developing towards a first-order polity campaign. We therefore argue for the importance of media biases in analysing EP election campaigns by incorporating tone and type of conflict into studies of first- and second-order European election campaigns.