EU Institutions and the Drive for Peace: The Power of Ideas 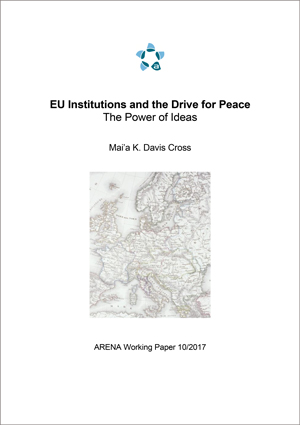 This paper explains how international institutions contribute to peace among states in the international system. To do so, it reviews the various schools of thought that advance theories about the relationship between institutions and peace, and then focuses on the case of Europe. The main argument is that ideas are a core part of why institutions matter and how they shape state behavior. In particular, the idea of federalism has been one of the most influential and enduring ideas defining the trajectory of European integration. It is often recounted that early thinkers and leaders, especially the so-called founding fathers, debated whether federalism or functionalism was the path to take after WWII, and that they ultimately settled on the latter. Perhaps because the EU is only quasi-federal today, the origins and development of the federalist idea are rarely investigated. Drawing upon fresh archival research, this paper focuses on the early actors involved in spreading the notion that federalism was the best form of political organization to preserve the future of peace in Europe. The federalist movement in Europe became much stronger and more widespread than is often recognized, and it continues to influence what is possible today. The paper concludes that, partly as a result of this, EU institutions are enduring and legitimate, despite the numerous crises that Europe has faced in its development.

This paper was first published as GLOBUS Research Paper 4/2017