Equal Sovereignty: On the Conditions of Global Political Justice 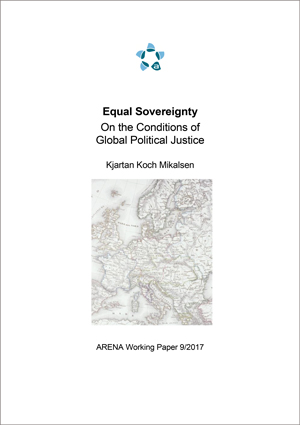 This paper discusses the role of state sovereignty in a just global order. The point of departure is two competing conceptions of global political justice: justice as non-domination and justice as impartiality. The former conception advocates an intergovernmental order of equally sovereign states, whereas the latter advocates supranationalism and play down the principle of equal sovereignty in favor of basic human rights. The arguments underpinning the sovereignty ideal of justice as non-domination are relatively weak, which makes this position susceptible to powerful counterarguments from justice as impartiality. Since justice as impartiality has problematic features of its own, I here present a stronger case for the equal sovereignty of states, drawing on a strand of republican thinking that Philip Pettit has dubbed ‘Franco-German republicanism’. Specifically, I argue that instead of conceiving human rights and state sovereignty as core ideas of competing normative conceptions, we should see them as equally important aspects of the same conception. Respecting the sovereign rights of states is part and parcel of respecting the rights of individuals. Although equal sovereignty is not all there is to global justice, we cannot claim to promote justice globally without recognizing the equal sovereignty of states.

This paper was first published as GLOBUS Research Paper 3/2017.