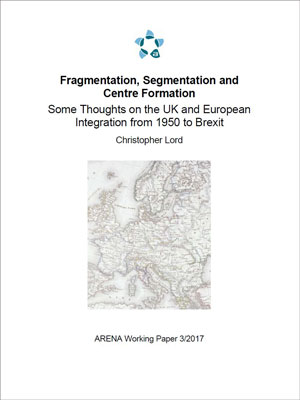 It might be thought that Brexit is just a case of the UK getting honest with itself and its partners. The UK never really accepted European integration. Hence, it should never have joined a body committed to an ‘ever closer Union between the peoples of Europe’ (even allowing for the convenient plural of the word ‘peoples’). Yet, the UK’s attitude to integration has not solely been one of aversion to European centre formation. If centre formation, segmentation into a differentially integrated Union and fragmentation are three possible trajectories of European integration, the UK contributed to a major act of European centre formation: namely, the formation of the single market. Elsewhere, British Governments settled for largely constructive forms of segmentation. One thing the UK has not been is a source of fragmentation. Of course, Brexit may change that. Brexit may be both necessary and impossible: something the British Government must do and something it cannot do. Brexit could fragment both the UK and the EU. Yet, a continuation of ‘constructive segmentation’ by other means – or even renewed centre formation – cannot be fully ruled out as possible outcomes of the Brexit referendum.