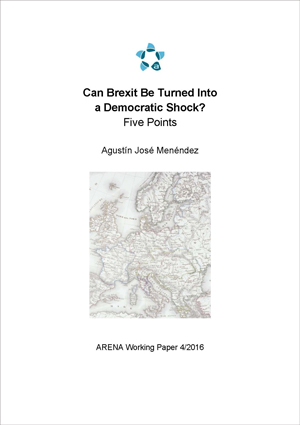 This paper argues that to make sense of Brexit, we have to start by clarifying what was the actual content and relevance of the ‘Brexit deal’ agreed between the United Kingdom and the European Union in February 2016, and how that deal allowed the British Prime Minister to shape the terms of the debate in order to further short-term and narrowly partisan interests, and, at the same time, provided the European Council with a new opportunity to further the locking in of the neoliberal turn of the EU.

It also argues that causes of the leave victory are many and complex. Pending a full analysis of the social and economic geography of the vote, it is clear that the thesis favoured by a good deal of media pundits – the leave vote reflecting the triumph of low nationalistic bordering on xenophobic feelings – is too simplistic and reductionistic by half. Such an explanation fully misunderstands how the migration issue is shaping political debate in Britain and the rest of Europe, while obscures the influence that the ongoing neoliberal mutation of the EU is likely to have had in the outcome.

The paper finally concludes that for Brexit to be turned into a democratic shock, with the potential of leading to a fairer and more democratic EU and UK, it is necessary to avoid Brexit as usual, i.e. the British and European leadership finding a formula to leave things unchanged despite the outcome of the referendum, and take Brexit as the incentive to redefine what European integration is and should be.