Is the grass greener on the other side of the Channel? How Swiss news media presented Brexit as a ‘benchmark’ for Switzerland 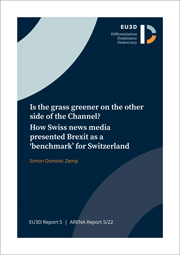 This report analyses how Swiss newspapers have referred to Brexit as a benchmark when evaluating recent attempts of the Swiss government to (re-)negotiate its bilateral relations with the EU. The results show that Brexit references were important in the public debate about the Swiss EU relationship and were often referred to as a ‘role model’, what contrasts with evidence indicating ‘deterrent effects’ of Brexit. Especially during Brexit episodes, which were characterised by a high issue salience and a good comparability with the Swiss situation, journalists and political entrepreneurs frequently benchmarked the Swiss situation against the Brexit process. Overall, the evidence from Switzerland suggests that the Brexit experience matters for public discussion and opinion formation on European (dis-)integration beyond the UK and emphasizes a hitherto neglected influence of news media in framing Brexit as a benchmark for Europeans.

Is the grass greener on the other side of the Channel? How Swiss news media have benchmarked Switzerland’s EU integration process against Brexit