Publishing for the choir: British centre-left justifications for European integration in the Brexit debate

In this report, Lars Wibe Hagen investigates the discussion of the EEA and Norway models in the newspaper the Guardian to identify how the British centre-left evaluate the integration project. 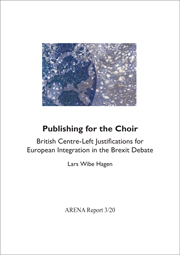 While Brexit has encouraged further interest in the phenomenon of right-wing Euroscepticism, it also serves as an opportunity to investigate pro-European attitudes. The Brexit process put pro-Europeans in a position where their place within the integration project was under immediate threat and required something so unusual as pro-European mobilisation. This report aims to contribute to that investigation by examining the discussion of the EEA- and Norway-plus models featured online by the British newspaper the Guardian. Specifically, it considers the debate in terms of evaluations that explicitly promotes or rejects these models as desirable future relationships.

The analysis finds considerable congruence between the discussion in the Guardian and British interpretations of European integration more generally, as well as with the Conservative-dominated referendum debate. Specifically, supporters typically based their position on an understanding of integration as an economic project, while detractors usually emphasise sovereignty and democracy. The congruence suggests that, despite different conclusion about the desirability of European integration, a consistent understanding existed in Britain across time and ideology platform, of what integration is ‘supposed’ to be. There is little evidence of innovation in the Brexit discourse on the centre-left; pre-existing frames and interpretations remained untouched.