In this report, Andreas Bjørnbekk asks by which means the European Union attempts to advance a European identity. Bjørnbekk further analyses which types of nationalism the EU's identity signifiers are founded on. 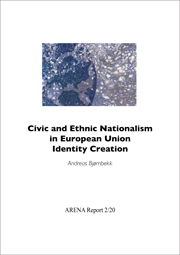 When in 1984 the European Council decided to appoint a committee to study which measures it could adopt in order to establish a ‘people’s Europe’, the European Economic Community entered a stage in its history which essentially began a process of national identity-building. Up until that point, the European project had mainly revolved around economic and institutional integration, without adopting vital aspects of what constitutes, in Benedict Anderson’s words, an ‘imagined community’. The recommendations from the Committee on a People’s Europe were clear; to establish symbols and initiatives which common people could identify with and participate in. During the two decades following the report, the European Union would come to fly its own flag, play its own anthem, provide four freedoms, and establish a common currency – many of them, if not all, innovations introduced in the pursuit of a common European identity.

This report examines several EU identity creation initiatives, with the aim of understanding which concepts of nationalism they were founded on or intended to promote. As such, the report deals extensively with the concept of nationalism and identity, and splits the concept into two distinct categories: civic and ethnic nationalism. In doing so, the report dissects the Union’s documents and prior academic research to study some of the most prominent signifiers of the European Union to date.