Experts at networking? The constrained influence of experts in Norwegian policy-networks

In this report, Marte Lund Saga analyses the social networks of Norwegian official advisory commissions. By using Social Network Analysis, she looks at changes in the network over time and asks whether experts have gained an increased influence over Norwegian policymaking. 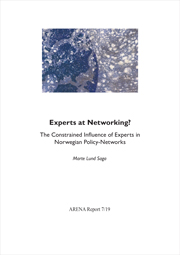 The Norwegian official advisory commissions (NOU) play an important role in giving policy advice to elected officials in the Norwegian government. This report explores the social network structures of the commission members in light of theories and empirical contributions in the field of democratic policymaking. Utilising data on all of the commission members between 1972 and 2016, this report provides new insights to the question of ‘who is important in the policy process?’.

In recent years, the amount of commission members with academic backgrounds has increased markedly, while the participation of public officials and interest group representatives has slightly declined. However, studying the commission members as nodes in a social network has highlighted that members with academic backgrounds have not become more central in the social network. Instead, public officials seem to constitute the largest share of the most central commission members during the whole 45-year time period, while interest group representatives seem to become more central in the network over time. Although not challenging the existing research on the field, this report provides some nuance to the widely accepted view that experts have become increasingly important in the system of Norwegian advisory commissions.

Marte Lund Saga has a Master of Political Science from the University of Oslo. She was affiliated with ARENA Centre for European Studies through the student scholarship. This report is based on Lund Saga's MA thesis as a student on the project 'Expertization of public inquiry commissions in a Europeanized administrative order' (EUREX).

More about the EUREX project: Expertization of public inquiry commissions in a Europeanized administrative order (EUREX).