Financing the future: Assessing the EU's approach to financing the Sustainable Development Goals in light of global justice

In this report, Sunniva Unn Hustad analyses the EU's perspective on the financing of sustainable development, and discusses whether it is compatible with ideas of global justice. 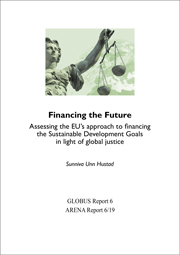 In 2015, the United Nations adopted the Sustainable Development Goals (SDGs). This signified a leap in global development policy from the previous framework, the Millennium Development Goals (MDGs), in terms of purpose, concept and politics. The financing of these goals is key to their success, and the EU, due to its development cooperation budget, is going to play an important role in this process.

This report contributes empirically to the literature on the EU’s development policy by analysing the EU’s position towards financing the SDGs. Applying a global justice approach, this report forwards three main arguments. First, it suggests that there has been an increasing emphasis on the role of the state in financing its own development. This has happened at the expense of the safeguarding of the EU’s repeatedly emphasised core values, such as human rights, democracy, equality and the rule of law. Second, the report also shows that the EU still considers its own position to be ‘the correct’ way of governing. Ultimately, the report identifies characteristics of the EU’s position towards financing development that are difficult to justify in terms of justice.

Sunniva Unn Hustad has a Master of Political Science from the University of Oslo. She was affiliated with ARENA Centre for European Studies and the GLOBUS project through the student scholarship. This report is based on Hustad's MA thesis as a student on the GLOBUS project.