The EU as Promoter of Global Gender Justice: Combating Trafficking in the Face of the ‘Migrant Crisis’

In this report, Vera Sofie Borgen Skjetne analyses the EU's promotion of gender justice in its approach to trafficking in human beings and how this changed during the so-called 'migrant crisis'. 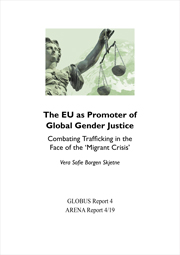 The European Union (EU) has committed to promote justice and gender equality on the global level. This report examines the EU’s promotion of these goals through an analysis of its approach to trafficking in human beings. Building on theories of global justice and different feminist theoretical contributions, the report asks how and to what extent ideas of gender justice are evident in the EU’s policy documents on trafficking in human beings, and how these ideas changed when faced with the so-called ‘migrant crisis’.

The report finds that the EU’s approach to trafficking following the ‘migrant crisis’ changed from a victim-centered view of justice - highlighting universal ideas of gender justice - to a state-centered view of justice. Two tendencies are central to this shift: 1) the shift to see trafficking and smuggling as something alike, and 2) the focus on trafficking as a security problem. The report also finds that despite this overarching change, the EU still devoted considerable attention to universal gender justice ideas and recognition of group differences. Hence, this report argues that there is a need to redirect the discussion on gender in the EU’s external relations to consider how gender justice is promoted, acknowledging that promotion of gender justice takes different forms, involving different normative dilemmas.