In this report, Johanne Døhlie Saltnes investigates norm contestation and the relationship between norms and interests in the EU’s development policy. 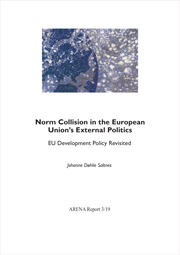 The European Union (EU) has committed to conduct a value-based foreign policy, for example by promoting the respect for human rights abroad. However, such value-based goals are not always followed consistently. The reason for this is often assumed to be that the EU sets its core values aside when they collide with its interests.

Drawing on recent constructivist research on the contestation of norms, this report argues that such inconsistencies are not just a question of values versus interests. Just as ‘national interests’ come in different forms that may compete with each other, policy-makers may be confronted with different norms pointing them in different directions. This report contains three articles that investigate norm contestation and the relationship between norms and interests in the EU’s development policy.

On the one hand, the findings support the idea of the EU as a value-based foreign policy actor. However, the report also questions the assumption that a commitment to norms is a particular characteristic of the EU’s foreign policy. Norm evaluations are also important in states’ policy-making processes. Hence, there is a need for a broader reconsideration of the basic assumptions of foreign policy analyses.

Johanne Døhlie Saltnes obtained her PhD in Political Science from the University
of Oslo in 2019. She was affiliated with ARENA during her fellowship period.