Integration in the European Union’s Field of Defence and Security

In this report, Johanna Strikwerda analyses the role of the European Commission in the EU's Common Security and Defence Policy, and finds that members states have accepted an increased autonomy of the Commission due to a sense of obligation concerning its role as an executive. 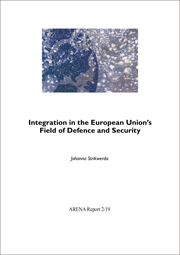 The European Union’s defence and security policy has long been understood as being in the hands of sovereign powers. This report challenges this understanding by addressing the role of a supranational institution, the European Commission, in the Common Security and Defence Policy of the EU.

The aim of the report is to answer the following question: Why have EU member states voluntarily accepted policy initiatives from the Commission in the field of defence and security? So far, scholars have understood the increased autonomy of the Commission in other policy fields as driven by the its strategic (enforcement) powers. Moreover, the Commission is known to have influence in EU foreign policy, but its initiatives have not been studied from a member
state perspective.

This report analyses six different member states and finds that member state actors have accepted the increased autonomy of the Commission due to a sense of obligation concerning its role as an executive. Thus, the report addresses the role of norms. Furthermore, the findings reveal the role of national civil servants in the policy making process, and the framing of new policies within established norms, such as non-discrimination.

Johanna Strikwerda obtained her PhD in Political Science from the University of Oslo in 2019. She was affiliated with ARENA during her fellowship period.

By Johanna Strikwerda
E-mail this page