In this report, Lea Augenstein investigates the concept of global justice as mutual recognition from a postcolonial perspective, and argues that recognising others is never a neutral or unbiased process and is therefore insufficient in bringing about the justice it promises. 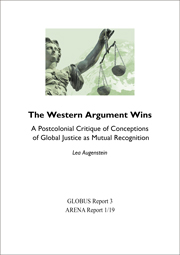 How should the European Union (EU) deal with illiberal dissenters like Poland or Hungary? How should peacekeeping forces interact with indigenous populations? How can we make meaningful the ‘voices’ of those who express themselves through silence, secrecy or their body actions? All these questions deal with the problem of recognising difference and are thus questions of justice. Conceptions of global justice as mutual recognition have tried to address these questions emphasising the need for a neutral space of discussion, in which diverging voices can be embraced in their specific contexts.

However, this report argues from a postcolonial perspective that recognising others is never a neutral or unbiased process. Who we recognise and how we recognise someone depends on specific eurocentric presuppositions. The way Western theorists conceptualise a ‘just’ interaction is tailored to the workings of modern Western societies and is thus excluding, especially for subalterns who do not share our cultural background. As an alternative approach this report offers a ‘culture of restraint’. If discourse is never free of power and thus never free of domination – as Michel Foucault has argued – then we have to create spaces for subalterns in which they can express themselves in the most humane way, irrespective of criteria of rationality, objectivity or neutrality.

The Western Argument Wins:
A Postcolonial Critique of Conceptions of Global Justice as Mutual Recognition