Public commissions are intrinsic to the Norwegian political system, but the procedures for member selection are unclear. Based on existing research on public commissions and knowledge utilisation, Simen Andreas Nefstad Grinden questions how and why commission members are selected. 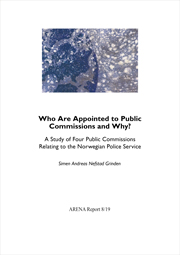 Norwegian decision-makers regularly appoint commissions to evaluate policies, draft laws and suggest reforms, making the public commission regime intrinsic to the Norwegian political system. Despite the high number of commissions, the procedures regarding the selection process of commission members remain unclear. This report asks how and why specific members are selected, and whether selections can be explained by instrumental, strategic and/or symbolic reasons.

This report looks at four commissions appointed by the Norwegian Ministry of Justice to review different parts of the organisation of the Norwegian Police Service. While theoretically grounded in the debate on knowledge utilisation, this report also employs three research streams on public commissions, corporatism, state control and expertisation, in its analysis.
Based on 18 interviews (with commission members and bureaucrats), this report provides novel insight into selection procedures. It is also suggested that selections, in certain cases, can be explained according to ‘non-instrumental’ reasons (i.e. strategy and symbolism), and that the final member composition can be fairly random in terms of persons, but not in terms of the characteristics  and competencies that these members provide.

Simen Andreas Nefstad Grinden has a Master of Political Science from the University of Oslo. He was affiliated with ARENA through the student scholarship. This report was written as part of the project Expertization of public inquiry commissions in a Europeanized administrative order (EUREX).

More about the EUREX project: Expertization of public inquiry commissions in a Europeanized administrative order (EUREX).