Eirik Tegle Stenstad aims to uncover the decision-making logic behind the evolution of the EU financial stability framework in this ARENA report. 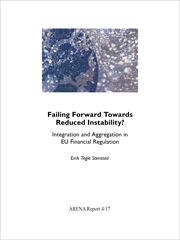 This report finds that decision-makers might not fully understand the risk of piecemeal reforms. The evolution of the EU financial stability framework demonstrates that policy learning is lagging real economic problems also when it is problem- and crisis-driven, and that the weaknesses of intergovernmental bargains become more prominent in times of crises.

Eirik Tegle Stenstad has a Master of Political Science from the University of Oslo. He was affiliated with ARENA through the student scholarship.