The impact of EU policy-making on asylum outcomes

Stein Arne Brekke analyses the effects of the Common European Asylum System (CEAS) in this report. He presents a thorough quantitative study of the convergence of European asylum recognition rates. 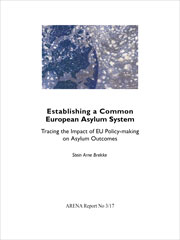 In October 1999, the European Council agreed in Tampere to work towards the creation of an area of freedom, security and justice at a European level. Among other measures, the Tampere Council discussed the creation of a Common European Asylum System (CEAS). One of the main goals of the CEAS was to ensure that all EU member states protected the rights of asylum seekers and refugees. Since 1999, the EU has adopted several legislative measures, aimed at harmonising common minimum standards for processing and deciding asylum applications. Yet, it is still an open question whether these measures have been successful in practice. By providing a thorough quantitative study of the convergence of European asylum recognition rates this report attempts to measure the effects of the EU’s efforts to harmonise European national asylum policies. The report finds indications that national recognition rates converge as a result of national EU’s policies in the field of asylum, and thus provides a less pessimistic view of the effect of EU’s efforts than previous studies.

Stein Arne Brekke has a Master of Political Science from the University of Oslo. He was affiliated with ARENA through the student scholarship.