In this report, Eilev Hegstad analyses expert advice in decision-making dealing with ethical questions through a study of the European Group on Ethics in Science and New Technologies' work in the field of animal cloning for food supply. 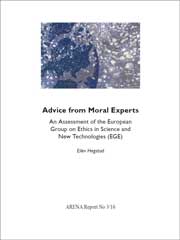 Moral experts – people who presumably know more about moral issues than others – play an important role in giving advice to governments on how to deal with ethical questions. The existence of ethics committees raises fundamental normative questions concerning the limits and the legitimate role of moral experts in decision-making processes. This report is based on the assumption that moral expertise exists, and that the legitimacy of ethics committees is intimately linked to their members’ performance as moral experts.

The European Commission has a vast number of advisory committees. The European Group on Ethics in Science and New Technologies (EGE) is composed of philosophers, theologians, lawyers and scientists and gives advice on ethical questions. This report evaluates the EGE’s work in the field of animal cloning for food supply by assessing its members’ deliberation on the basis of three concerns: logical validity, empirical soundness and normative reasonableness. Findings suggest that while EGE’s recommendations are logically valid, there are certain shortcomings on empirical soundness. Moreover, as different ethical viewpoints are not presented and the degree of justification is low, the report finds that normative reasonableness is the criterion that the EGE is furthest from meeting.

Hegstad has a Master of Political Science from the University of Oslo. He was affiliated with ARENA through the student scholarship.

Advice from Moral Experts: An Assessment of the European Group on Ethics in Science and New Technologies (EGE)
Eilev Hegstad