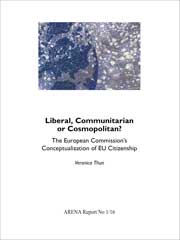 What is special about EU citizenship? There is broad consensus amongst scholars that EU citizenship has changed and contested our traditional statist notions of the concept. The notion of 'citizenship' has become more far-reaching and complex, and increasingly borderless. This report analyses the concept of EU citizenship from the viewpoint of the EU’s supranational executive body: the European Commission. Attempting to uncover what ideas of citizenship have been most prominent in the Commission, the report contributes to research on the 'what is' question of EU citizenship.

The analysis uncovers that the Commission has had a liberal, rights-based understanding of EU citizenship ever since Maastricht. With the enlargement to Eastern Europe and the breakout of the Euro crisis in the 2000s, a more complete idea of EU citizenship emerged. Communitarian notions of the active political citizen and notions of a European identity became of almost equal significance to rights, with some cosmopolitan elements in the background. In short, we have seen a shift from mainly rights-based ideas in the 1990s towards a mix of conceptions of EU citizenship in the beginning of the 2000s.

Veronica Thun has a Master in Political Science from the University of Oslo. She was affiliated with ARENA through the student scholarship.