In this report, Nina M. Vestlund studies the decision behaviour within an emerging multilevel EU administration, and finds that decision-making in the system is becoming increasingly normalized and centralized. 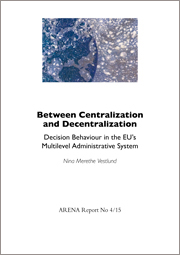 What characterizes decision-making in the EU administrative system? This report studies decision behaviour within an emerging multilevel European Union (EU) administration, composed of the European Commission, a growing number of EU agencies and national regulatory authorities.These actors are increasingly connected and integrated across levels of governance and national borders.There is disagreement among scholars as well as practitioners on the effects of these institutional developments, and whether they contribute to preserving executive power as decentralized and anchored within member states, or if they contribute to centralizing executive power at the EU level.

The report finds indications that decision-making in the system is gradually becoming normalized, in the sense that it increasingly embodies many of the organizational and behavioural patterns that are highly typical of executives from national settings. Furthermore, the findings show that executive decision-making behaviour is gradually becoming more centralized, with the European Commission as a core executive. The findings of this report thus challenge existing images that portray the European administrative system as sui generis and executive power as being mainly decentralized.

Nina M. Vestlund obtained her PhD in Political Science from the University of Oslo in 2015. She has been affiliated with ARENA during her fellowship period.