In this report, Guri Rosén analyses how the European Parliament has gradually increased its influence in the field of EU foreign and security policy. 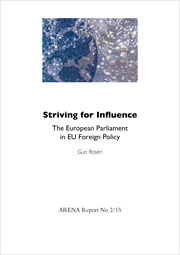 The conduct of foreign and security policy remains largely sheltered from standard democratic procedures. The European Parliament’s (EP) claim for more powers in EU foreign policy has been opposed with the argument that national parliaments are equally powerless. At the same time, EU foreign policy, and particularly its Common Foreign and Security Policy (CFSP), is often regarded as an exclusive domain for the member states.

How can we then explain the increase in the EP’s influence in EU foreign policy? Why would member states, in such a sensitive area, be willing to share their powers with Members of the European Parliament, over whom they have little, if no control? Three cases form the backbone of the report: one aiming to explain how the Parliament got access to sensitive documents in the area of security and defence, then its increasing participation in the CFSP budgetary process, and finally its new powers in the area of EU external trade policy. The analyses demonstrate how two mechanisms are key to understand the EP’s increased influence: the Parliament’s appeal to democratic principles, and the bargaining strategy it has pursued by linking concessions to areas where it has formal powers.