The British Self and Continental Other

In this report, John Todd analyses how the British discourse on Europe has evolved over the past forty years, culminating with Cameron's commitment to hold a referendum on EU membership should his part win the upcoming general election in May. 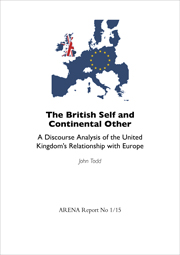 This report provides an accessible yet comprehensive analysis of how the British discourse on Europe has evolved over the past forty years. Prime Minister David Cameron’s commitment to hold a referendum on European Union membership in 2017, should his part win the next general election, was a major political milestone.

The report therefore examines the changes and continuities in this discourse over three key periods: the 1975 EEC membership referendum, the 1992-3 Maastricht ratification process and the proto-referendum debates of 2013. The consistent divide between a British self and Continental other over the forty years under analysis has been strongly reinforced by the increasing prominence of anti-immigration rhetoric within the discourse. Overall, the author notes that the impact of the Eurosceptics’ discursive campaign will have a significant impact should a referendum take place in 2017.

John Todd has a Master in International Relations from the Norwegian University of Life Sciences. He was affiliated with ARENA through the student scholarship.

ARENA Report No 1/15
The British Self and Continental Other: A Discourse Analysis of the United Kingdom’s Relationship with Europe
John Todd