John Erik Fossum and Agustín José Menendez are the editors of a new ARENA report on the crisis. The report is based on the workshop ‘Europe in crisis, Europe as the crisis?’, which took place in Oslo last spring. 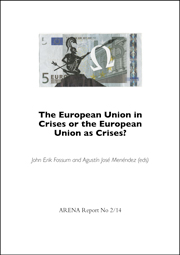 What kind of crisis is the European Union going through? Is it mainly a financial crisis? Or is it a sovereign debt crisis? Or are there deeper structural causes of the crisis? What role did the asymmetric design of the Monetary Union play in the development of the crisis? Is the crisis to be interpreted as a result of a transformation of capitalism that renders democracy impossible? Is this a single crisis or a set of overlapping and mutually reinforcing crises?

These are some of the questions that the authors of this volume address through critically engaging with the past, the present and the future of European integration, from a multitude of academic disciplinary angles.

More on the EuroDiv project

Summary from the conference