Conference on the future of Europe: Vehicle for reform or forum for reflection? 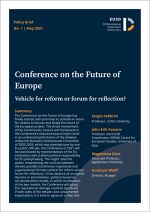 The Conference on the future of Europe has finally started, with promises to provide an arena for citizens to discuss and shape the future of the European project. The direct involvement of the Commission, Council and Parliament in the Conference’s executive board might result in an undesired politicisation of the debates. Unlike the Brussels Constitutional Convention of 2002-2003, which was presided over by non-EU public officials, the Conference of 2021 will be coordinated by representatives of the EU institutions with a direct political responsibility for EU policymaking. This might raise the stakes, emphasising the contrast between the two possible Conference trajectories and organisational formats (vehicle for reform versus forum for reflection). In the absence of an explicit decision or prioritisation, political dynamics will decide which model, or which combination of the two models, the Conference will adopt. The reputational damage could be significant if both sides of the debate raise unwarranted expectations. It is time to agree on a clear aim.