Resul Umit and Katrin Auel (IHS, Vienna) have published a new article in Journal of Contemporary European Studies, analysing the vote on the 'European Union (Notice of Withdrawal) Bill' in the House of Commons. 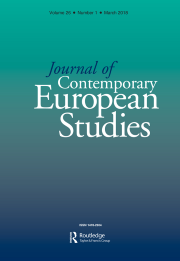 Advisory ex ante referendums, such as the referendum on the UK membership in the European Union in 2016, provide MPs with a (more or less) clear mandate from their principal, but they are not legally binding. Implementation thus still requires a legislative act, usually by parliament. MPs therefore face the decision whether to follow the will of ‘the people’ or to decide according to their own judgement, and thus whether to act as delegates or trustees. Just as importantly, advisory referendums can create situations where Members of Parliament (MPs) as agents are faced with conflicting mandates by different principals – i.e. by the electorate as a whole, by their own constituency and/or by their party. Agents facing conflicting mandates cannot avoid voting against one or more of the mandates and thus have to choose, which principal to ‘serve’. To explore this issue, the paper analyses MPs’ votes on the European Union (Notification of Withdrawal) Bill, and thus on triggering or not the Brexit process. Given the outcome of the referendum as well as the fact that most MPs did vote in favour of triggering the Withdrawal process, our main interest lies in exploring the decision of MPs not to follow the mandate given by the country.

Katrin Auel and Resul Umit
Who's the Boss? An analysis of the vote on the 'European Union (Notice of Withdrawal) Bill' in the House of Commons