Jarle Trondal has co-edited and contributed with three articles for a special issue of Politics and Governance, examining Nordic cooperation. 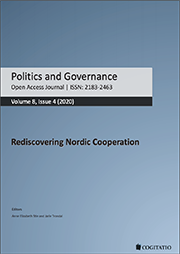 Introducing the Study of Nordic Cooperation

To rediscover Nordic cooperation this article develops a ‘conceptual grammar’ that provides general theoretical ‘images’ of cooperation that are systematically applied. Being supplementary analytical constructs, moreover, these images capture great variety and differentiation in Nordic cooperation. Next, this article provides a review of two sets of literature that are of particular relevance to this thematic issue. The first is a broader literature on European integration. The second is studies of Nordic cooperation. The article closes with an overview of the contributions to this thematic issue.

The Nordic countries constitute an interesting laboratory for the study of differentiated European Integration. Even though Denmark, Finland, Iceland, Norway, and Sweden share some historical, cultural, socio-economic and political characteristics, all those countries have ultimately opted for a different kind of relationship with the EU. Whereas Finland, a member of the Eurozone since its inception in 1999, has been considered to be part of the Union’s ‘inner core’ for quite some time, Iceland and Norway, in contrast, have opted to remain outside the EU albeit closely associated via the European Economic Area Agreement. The variation of relationships has also been reflected in Nordic parties’ positioning vis-à-vis European integration in general and differentiation of European integration in particular. Broadly speaking, party families can be distinguished along traditional (e.g., agrarian, Christian democratic, conservative, and social democratic) and modern (e.g., socialist left, green, and populist radical right) ideological orientations. Although political parties belonging to both the traditional and modern Nordic party families have adopted different stances on European differentiated integration, we would assume—against the backdrop of Nordic cooperation—higher levels of transnational cooperation in European matters. Consequently, this article examines the similarities and differences between parties belonging to the same ideological family, and the extent of transnational party cooperation in the Nordic countries. Drawing on a series of interviews conducted with party representatives as well as on official party documents, this article shows that although institutionalized party cooperation mostly reflects divisions between party families, such institutionalization does not include a common vision for European integration. We conclude that the low level of partisan Nordic integration is primarily caused by domestic-level factors, such as intra-party divisions, government participation and public opinion.

Public Administration and the Study of Political Order: Towards a Framework for Analysis

The contribution of this study is two-fold: First, it outlines a conceptual framework on political order; and secondly, it offers empirical illustrations on the case of Nordic cooperation. Taken together, the article makes a plea for public administration scholarship in the study of political order. Political order consists of a relatively stable arrangement of institutions that are fairly formalized and institutionalized. A common political order, moreover, entails that relevant institutions: (i) are fairly independent of pre-existing institutions; (ii) are relatively integrated and internally cohesive; and (iii) are reasonably able to influence governance processes within other institutions. The article empirically suggests that Nordic-level institutions are less likely to act relatively integrated and independently of member-state governments as well as being able to wield significant influence on public governance processes within member-state institutions.

Jarle Trondal
Public administration and the study of political order: Towards a framework for analysis
DOI: 10.17645/pag.v8i4.3264