Jozef Bátora and John Erik Fossum have edited a new book on the differentiation of the EU, published by Routledge. Several ARENA researchers have contributed with book chapters. 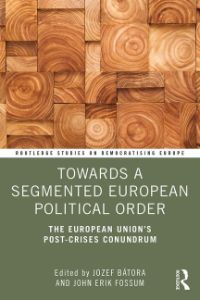 This book makes a distinctive contribution to the crucial debate on the European Union (EU)’s present and future development.

It systematically examines how the range of crises and challenges over the last decade have transformed the EU and relates those findings to the discussion of an increasingly differentiated EU. It argues that the post-crises EU shows clear signs of becoming a segmented political order with in-built biases and constraints. The book spells out the key features of such an order in ideational and structural terms and shows how it more concretely manifests itself in the EU’s institutional and constitutional make-up and in how member states constrain and condition EU action. Different states impose different types of constraints, as is underlined through paying explicit attention to the Visegrád countries.

The book will be of key interest to scholars and students of EU politics/studies, European integration and politics, East European politics and foreign policy.

3. Illusions of Convergence: The Persistent Simplification of a Wicked Crisis

5. What Kind of Crisis and How to Deal with it? The Segmented Border Logic in the European Migration Crisis

6. Toxic Neoliberalism on the EU’s Periphery: Slovakia, the Euro and the Migrant Crisis

7. European Solidarity in Times of Crisis: Towards Differentiated Integration

9. Undermining the Standards of Liberal Democracy within the European Union: The Polish Case and the Limits of Post-Enlargement Democratic Conditionality

10. Newspaper Portrayal of the EU in Crises in the Czech Republic, Slovakia and Hungary: The Union’s Imagined Linearity

12. Integration through Differentiation and Segmentation: The Case of one Member State from 1950 to Brexit (and Beyond)